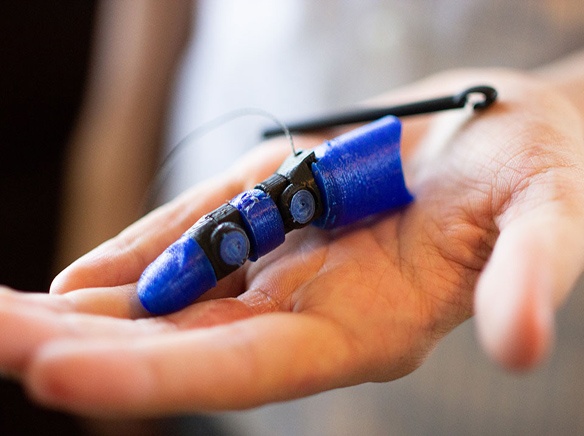 Jacob Saflar, a Granite Hills High School se­nior, is on a pathway to become a doctor. With a more flexible schedule after schools shut down in March, and his medical interests at the age of 16, Jacob started looking for ways to use his 3D printer for mechanical projects at his home in Alpine.

In his self-studies, he found inspiration through a YouTube video, showing how to make a prosthetic for missing fingers.

“Hopefully, I’ll get into a UC after this year,” said Ja­cob. “I’ve always been inter­ested in the body and how it moves. The fact that I can actually replace some parts of a body with plastic, fish­ing line and other things is incredibly interesting to me. I don’t know if this in particu­lar is my path in my future, but it is definitely one of my interests.”

Jacob said he was surprised to find such in-depth instruc­tions online. He watched videos created by Nicholas Brookins, the vice president of engineering at Hulu by day and a DIY prosthetic designer by night who created the Danger- Finger. Jacob said Brookins freely gives away the technique that is needed to manufacture a prosthetic finger.

“I found out that he had open-source soft­ware that I could use to create customizable prosthetics that would function completely mechanically,” said Jacob. “I wasn’t sure I could do this but, honestly, he’s the only reason this is possible.”

Dangercreations.com, Jacob said, is set up so the process can be done independently.

“So anyone who wants to create this kind of prosthetic can,” said Jacob. “The idea of it be­ing a finger is partially because I know that it is the primary limb for people who are missing part of their body. It is a very common thing, something that is actually mechanical, so it is possible to recreate.”

Jacob said he is taking on this project, mak­ing prosthetics for people using his 3D printer, something he had never thought about or ex­plored until watching the process online. After creating the parts, Jacob said it takes about an hour and a half to assemble each finger.

“I have to clean all the parts, drill out holes and assemble it,” said Jacob. “It is usually about five pieces and I have to attach the ligaments and tendons.”

The tendon that pulls back the finger is fishing line, so it attaches to the wrist, said Jacob. The ligaments are made of elastic. When a person moves the stump of the remaining fin­ger, it will move the prosthetic forward towards the palm and that the tension of the fishing line causes it to curl. If you move the stump forward, it will curl as a normal finer would.

“I have to take measurements for each prosthetic of the part of the hand that is there so I can determine the length of the finger, girth of the finger, what size the socket should be,” said Jacob. “I can then put that into the program and get a custom 3D model that I can print out and assemble for each individ­ual person.”

Jacob said he has made proto­types, but he is ready to fit his first prosthetic finger, which will be his first. He said it is sad that this cannot be mass pro­duced, but a custom fit is neces­sary, so the prosthetic does not damage the existing finger.

“One of the biggest issues is that the finger has different segments taken off, so often times I struggle because they may already have one knuckle, so I have to custom make the one and fit it to exactly that. Not all injuries are the same,” said Ja­cob.

Jacob said when this started, it was purely a personal proj­ect, but he has been able to link the project to his International Bachelorette, a diploma pro­gram for college classes in high school.

“One of the requirements is that you must have a Certifi­cate of Advanced Study project. I was already going to do this so I thought I would tie it in,” said Jacob.

At Granite Hills, Jacob is part of the Medical Pathway, the Na­tional Honor Society and Rotary Club.