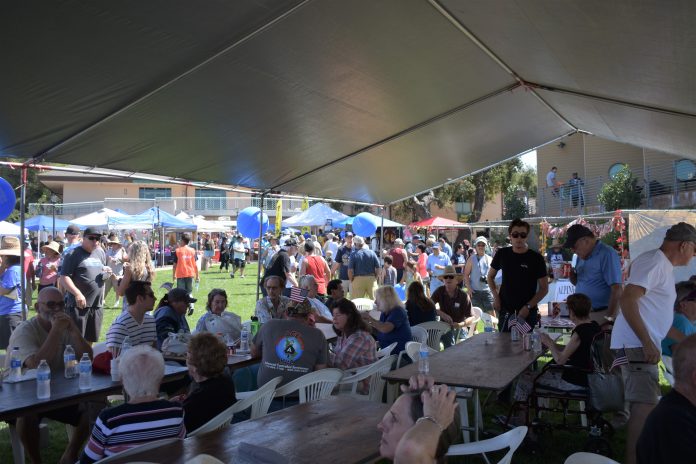 “We have 13 vendors and 15 chili cooks,” said Pene Manale, immediate past-president of the Alpine Kiwanis, “We also have 30 volunteers and 20-25 Key Club and Boy Scouts help­ing out. Estimated attendance is 500-600.” A beer garden and seating sections rounded out the offerings for the attendees.

Three Kiwanis chapters com­bined their efforts to organize the event— Alpine, Jamul, and Santee. The event ran from 11 a.m. to 2 p.m. with the winners announced at 2:30 p.m. The best chili awards went to Make Chili Great Again/Head East Salon – third place ($50 cash prize), Alpine Country Feed & Seed – second place ($100), and VFW Post – 9578 – first place ($200). The best decorated booth went to Out of This World that also had individuals dressed as Darth Vader, tank troopers and other Star Wars-like characters roaming the lawns of the A.C.C.

The Ideas band played cov­ers and their own songs such as “Zombie Twist” that had youngsters like 3-year-old Kin­ley Rauk dancing.

Kinley Rauk’s mother, Saman­tha said, “This is our third year attending. I tried ten chilis and I liked the Out of the World chili.”

Elk chili, meat and beans with different types of meat, chili with Italian sausage were just a sampling of “secret ingredi­ents” past winners and competi­tors offered up as their secret to a winning chili. No specifics of how much or what spices used was disclosed. Each team was required to cook a minimum of seven gallons of chili which was cooked on site.

Richard Edwords, with Kamps Propane, was on hand to provide frisbees to kids. As were other vendors selling products or handing out free items.

Kiwanis held to the motto of “Vote early-vote often.” For $10 a customer received 20 chili tast­ing stickers. Additional stick­ers could be purchased as well. Each sticker, or blue dot, was placed on a voting sheet. Chefs in the Alpine Country Feed & Seed booth could be heard say­ing “Blue dot, blue dot – that’s what we want.” Blue dots were tallied at the end of the event to determine the winners.

Additionally, there was a 50/50 drawing and raffle tickets could be purchased for chances to win various baskets. “We have 74 cars entries, mostly local – one from Escon­dido, Chula Vista, and Imperial Valley,” said Jerry Price, who headed up the Kiwanis car show committee. There were eight categories for car entries: hot rods, 50’s, 60’s, 70’s, pre-war/42 & older, antiques, others/rat rods, and foreign which ran from 7 a.m. – 3 p.m. Plaques were given out to participants that were sponsored by the Alpine Pepper Tree Vineyard’s Brent and Pat Wolf. The car show was held at the Alpine Elementary School’s parking lot.

Jerry Price emphasized that all proceeds are reinvested in Ki­wanis programs that typically benefit youth. 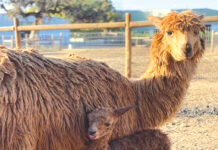 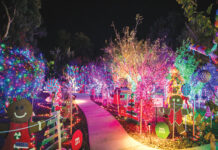 Enchanted Village opens lanes to public for good cause 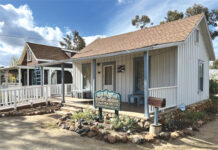