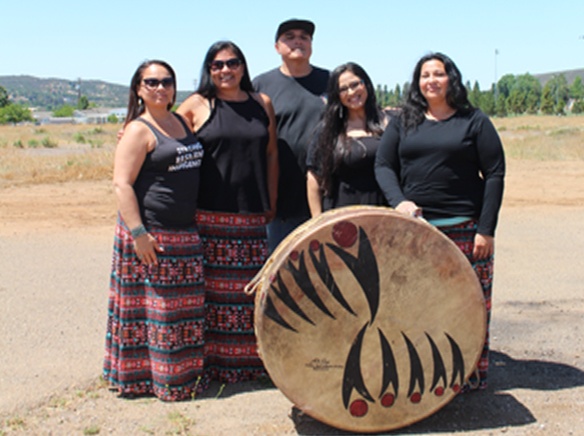 The fourth annual Alpine American Indian Education gathering could not take place in person this year due to CO-VID-19 related social distancing so organizer Sarah Hernandez took charge and moved the event online.
Standing in a colorful skirt with her long, dark hair draped over her shoulders, Hernandez addressed the online gathering with a nervous laugh.
“We are totally flying from the seat of our pants this morn¬ing. But, we don’t want the kids to miss out on the gathering so we decided to do this online,” Hernandez said.
The gathering started four years ago as a project where students living on Viejas reser¬vation could learn about tribal culture.
During a typical school year, the programming is assembled in conjunction with Alpine Union School District.
The official mission state¬ment from AUSD says the pro¬gram is intended to support and meet the unique educational and culturally related academic needs of American Indians.
However, Hernandez, seated on a bench outside her home on Viejas reservation, described it as part social studies, part his¬tory, but most importantly: an opportunity for the children to learn about themselves.
Although the group does not usually photograph or film events, and individuals try to communicate in person when-ever possible, the gathering was put together as an exception for the sake of maintaining the event as best as possible.
“There is so much that has been cut from schools. They were down to one day of P.E. each week. Then, everything closed and they’ve been so isolated. We have to do this for our children, even if it isn’t how we usually do it,” Hernandez said.
The performances began with Mending Feathers, a wom¬an’s group that sat in even incre¬ments around a four-foot wide drum and gently hammered out a healing drum song, followed by a Northern traditional fancy shawl dance, also dedicated to healing.
Afterward, drummer Leo Pre¬uss introduced himself, thanked everyone for coming together.
“You know, our ancestors had things figured out, they knew how to walk in harmony and they knew how to be connected so I’m going to sing a couple of old songs to help us in that way,” Preuss said.
Before beginning his first song, he ran his hands over the drum in a circular caress and ex¬plained the song was to thank the creator and ask for a bless¬ing. He said he thinks everyone could use a little blessing right now.
Following Preuss, Ralph Christman took his turn on the live streamed gathering with an educational talk on history and music before performances continued with Bird Songs.
“We’ve been working to try to create economic development but we are also doing our best to hold on to our traditional culture, language and songs,” Christman said.
The online gathering fin¬ished with Gina Sutton provid¬ing a demonstration from her home kitchen on how to make Indian fry bread. While sifting flour through her hands, Sut¬ton took the opportunity to ask captive viewers to provide pa¬perwork to AUSD so children living on the reservation are counted for extra school fund¬ing.
“We want to make sure your child can be counted. We’re sup¬posed to get more services and education services afforded to us so ask for that,” Sutton said.
Hernandez said it is challeng¬ing to get parents to submit the 506 form that qualifies Native students for funding.
She says reservation resi¬dents often avoid emails; their preference for face-to-face com¬munication does not lend itself well to gathering forms and personal information. However, she calls herself an urban Indi¬an who resides on Viejas Indian reservation; she is determined to bridge the divide.
Like everything else right now, she said, things are hard but “we have to do the best we can with it, we have to make things better and we can’t give up.”