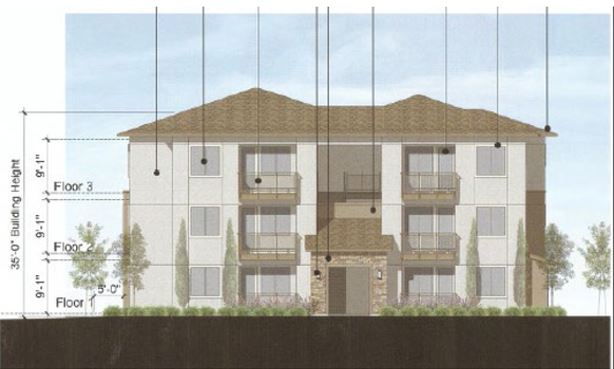 The Alpine Family Apartments project is located on two lots totaling 1.86 acres, located at the west end of Marshall Way in the Alpine Community Plan area, 0.3 miles south of Interstate 8. The project site is surrounded by existing single-family dwellings, condo­miniums and multi-family housing developments and is approximately 550 feet south of Alpine Boulevard.

The project entered into an Affordable Housing Agreement with the County of San Diego Housing and Community Development Services Department and awarded $4.3 million through HCDS. The San Diego County Board of Supervisors approved the funding on Feb. 25, 2020. This agreement requires the de­velopment to reserve 31 units for very low-income households and six units for low-income households.

The Alpine Community Planning Group recom­mended to deny the project.

Ashley Smith, San Diego County Project Planning Division and Planning and Development Services de­partment chief, said ACPG focused on certain areas of concern of why the project should not be approved. It focused on parking on the surrounding streets, access to the project site, and pedestrian safety due to the lack of sidewalks there.

“Just to be clear, the ACPG’s denial is a recommen­dation for consideration by the planning group,” said Smith. “We did take those points into account, but when looking at all the code requirements required to be met by the site plan, we were able to make findings that those were completed appropriately. Hence why we moved forward with a decision by the director to approve the project.”

Smith said the ACPG filed an appeal of that decision in December 2020 based on the same merits.

“The Planning Commission is the appeal authority for a director’s decision, so they heard the appeal on Jan. 22, and voted to deny the appeal and uphold the approval of the project,” she said. “The design is part of the site plan modification process, so they give us conceptual designs of the structures. That comes from the applicant, so in this case it was the Family Alpine Apartments, LP. There are community plan guidelines which we review those designs against, so they have been found to meet those guidelines.”

In his appeal to the county to scrap the current de­sign, ACPG Chair Travis Lyon said the project could be allowed by “right,” and could be constructed with only ministerial approvals, except for B Designators placed on properties within village cores that requires projects on those properties to go through the design review process. Lyon said the current design should be tossed aside, especially when it effects public safety.

Lyon said they met with the county on site to dis­cuss the portion of Marshall Road that is private prop­erty and occupies about a quarter of that road.

“All site distance studies and the requirement that ingress and egress be through legal access through a county maintained road was all based on the fantasy that residents will take the roundabout route in travel­ing up Eltinge Drive to Marshall Way, then back to the project rather than cross that small strip of pri­vate road that creates a direct connection to Marshall Road to the north,” he said. “This project is part of the private easement that needs to be improved and dedicated to the county as a publicly maintained road.”

In an email to Lyon from the County on Jan. 6, the County said it requested the applicant to conduct a sight distance analysis at the inter­section of Marshall Road and Elt­inge Drive and determined based on sight distance and traffic vol­umes, and all-way stop sign at this intersection was not warranted, as a stop control already exist on Elt­inge Drive. The County also stated that it is working with the applicant to see if they would be willing to put in a stop sign at that intersection, at their discretion, and approval of the Board of Supervisors.

Lyon said there is a lack of pe­destrian safety leaving the project site. He said the Design Review Board and the ACPG both request­ed that these 120 feet of sidewalk be constructed from the project’s northeast corner to existing side­walks on the adjacent property to the north. The County responded to Lyon, that it does not have the authority to require sidewalks out­side the limits of the project front­age and on a private road.

Lyon said that parking was also a strong issue, especially for the surrounding communities.

“The truth is that surround­ing streets will be inundated with parked cars from the project who will have a horrible time parking at their own residences,” said Lyon.

“This project is providing in the low and very low-income catego­ries,” she said. “We look at the Area Median Income. That number is $92,500. To be in the low income range, that would be a person mak­ing 51 to 80 percent of that AMI. Very low would be making 50 or less percent of the AMI, to qualify.”

Smith said that now that the ap­plicant received its discretionary approvals, the site plan modifica­tion granted by the commission on appeal in January, it now needs to receive any grading and improve­ment plans completed, then mov­ing forward, building permits to go vertical on the struc­tures.

“As they go to get their grading improve­ments, there are sev­eral conditions of ap­proval from the site plan modification that need to be met before we can grant a grading permit for the project,” she said.

Lyon said the property has a natural 25 percent slope from the east to the west and that the project design does not follow the contour of land.

“All four buildings and parking are essentially sited on a table­top that is achieved by a massive amount of fill being brought onto site,” said Lyon. “There is no doubt that this project, three stories high, located on a naturally high area will stick out like a sore thumb. Design guidelines are in place to prevent other issues such as the disruption this amount of grading will cause. The planning group estimates this project may require up to 10,000 cubic yards of dirt to be imported. Look at the 14 foot retaining walls on the north and south property lines. Look at the 31 feet staggering retaining walls to the west side of the project.”

Smith said the applicant has not indicated a building time frame yes, but the site plan modification is good for a period of two years. They would otherwise have to re­quest a time extension.

“I do think that this applicant is very motivated to move forward, but I do not have an expectation of when they will receive their grad­ing or building permits,” she said.

Smith said the county has needs to provide housing at each income level and there are only certain general plan designations that al­low for a density high enough, which typically allows for these types of units to be provided.

“In order to meet those needs, that needs to occur countywide, not in just one specific area or those numbers are probably not going to be met,” said Smith. “From the county’s perspective, they have abided by all of the requirements in place to allow us to make a decision to approve the site plan modification for the use that they requested.”