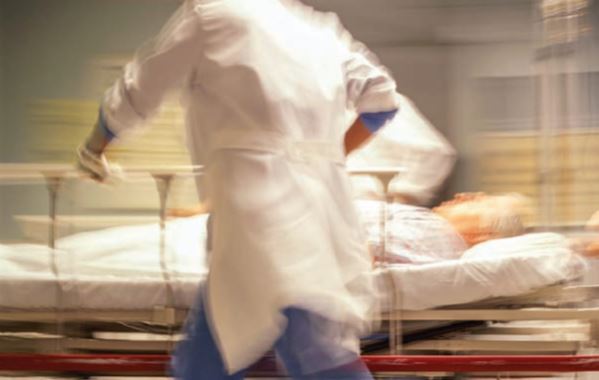 Sharp Grossmont Hospital Chief Medical Officer Nancy Greengold, MD, MBA, said at the beginning of the pandemic, they were just feeling their way and did not think they had a full sense of how challenging facing COV­ID-19 would be.

“We could only guess how rapidly the vi­rus would spread, the various mechanisms by which it was spread, or how best to try to treat it,” said Greengold. “Everything was new, from what type of personal protective equipment we needed to lab testing to management rec­ommendations.”

Greengold said Sharp was accustomed to dealing with operational challenges in a busy hospital and has extremely experienced disas­ter management teams.

“However, this particular crisis has been much tougher than anything that most mod­ern-day hospitals have faced in that it present­ed a threat to everybody, not just a subset of humanity. Information about how COVID is transmitted grew quickly, forcing us to evolve our practices fast, especially in relation to infection control, the use of personal protec­tive equipment, and laboratory testing,” said Greengold.

Marguerite Paradis, director of Emergency Care and Critical Services Sharp Grossmont Hospital said in the beginning, as a nurse, like everyone else in healthcare, they were watch­ing what was happening on the other side of the world.

“I was watching it and thinking about how this would impact us,” said Paradis. “I remem­ber watching the news. We were screening, but it was before we were even taking precau­tions. Everyone coming into the hospital was considered exposed or having COVID-19. Even before that, I remember it being very surreal. Was this really going to come?”

Paradis said Grossmont has an astute emer­gence preparedness team, had done a lot of work around Ebola, so they were prepared for some of the most contagious diseases out there.

“This is a very contagious disease,” said Par­adis. “It could strike a large portion of the pop­ulation and have a detrimental effect on people having profoundly serious symptoms. Death was one of those outcomes for many people. We did not understand at the time what it was going to be like, but that was sort of our frame of reference. I remember when we were meet­ing, we thought we would need to utilize some of those concepts as Ebola.”

Paradis said that it was the structure on how information was disseminated to COVID nurses and leads, that helped determine how to manage patients, both COVID and non-CO­VID. Everyone was informed of new processes at the same time in the emergency depart­ment, ICUs, and all other areas of the hospital.

“There was a lot of back and forth, and sometimes in the same day you were updating processes like how we were doing swabs, how we were incubating people, what kind of PPE we were wearing, what was considered more exposure, what were the highest risks proce­dures,” said Paradis. “All of that was coming in in that first month, but what was consid­ered high risk or low risk, how we were going to mitigate the risks was changing all of the time. Incident commanders met twice a day and our incident command structure was open 24/7 from the very beginning.”

“It was a lot of work and we worked end­lessly,” said Paradis. “I was working 16-hour days. Sometimes you would work the day, go home to sleep and come back at the night shift because there were only six of us that were incident commanders. We rotated so we ran the command centers, not adding new people because they would have to be brought up back to speed. We are still the same six in­cident commanders. For the last year, 24/7, somebody has been at the incident command center or on call.”

In a previous version of this story Chief Medical Officer Nancy Greengold was incorrectly identified as possessing an MDA rather than an MBA.

The Alpine Sun regrets the error.