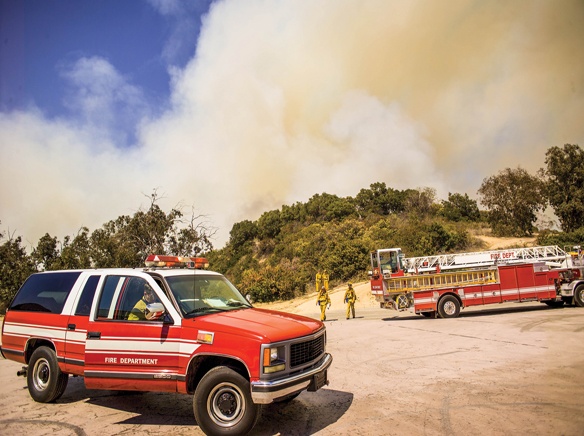 The San Diego County Board of Supervisors July 13 approved spending $2.5 million on roadside vegetation management, followed by a July 16 Wildfire Preparedness bulletin generally warning East County residents: wildfire prevention is being funded but residents have to plan ahead.

According to county officials, 79% of unincorporated San Diego county, including a great deal of East County, falls in high or very high fire hazard severity zones, and District 2 Supervisor Joel Anderson said the funding is especially crucial to the safety of backcountry residents, yet advised residents to plan ahead.

“As a long-time resident of Alpine, I have witnessed first hand how devastating wildfires can be. Wildfires do not discriminate in their destruction, so it’s important that all San Diegans, and especially those in my district, make a wildfire preparedness plan,” District 2 Supervisor Joel Anderson said.

“Our greatest risk for large, catastrophic fires in the county comes from the presence of Santa Ana winds. Those winds come from the east and push west, meaning fires can burn from East County towards the more populated communities,” Shoots said and even if residents are not directly affected by fires in San Diego County, smoke and ash can fill the air throughout the region for weeks after a fire.

In 2020, California historically experienced six of the largest and most destructive wildfires in state history, including the Valley Fire that burned southeast of Alpine. It was, Shoots said, “an example of how quickly a fire can spread in hot, dry and windy conditions,” and ultimately destroyed 30 homes and forced over 1,400 residents from their homes.

Since the Valley Fire, Shoots said, several fuelbreak projects have been completed or are underway in East County.

“Widening and improvement projects on Wisecarver Truck Trail in Lawson Valley and Suncrest Truck Trail in Crest have been completed. Another project in Boulevard is underway, with three additional projects planned for the coming months,” Shoots said.

Local staffing has been increased this year, he said, along with additional firefighter hand crews and equipment now available for fires in San Diego County.

In the most recent County budget, funding was increased to convert and staff three remote fire stations in the Fire Protection District from two to three firefighters, along with one California National Guard

A Wildfire Analyst position was also newly funded for 2021 to assist with fire risk forecasting.

However, private landowners play a crucial role in preparing an area for fire, said Shoots.

As the one-year mark of the Valley Fire approaches, Anderson, who represents many of the most fire-prone communities, asked local residents to create a wildfire preparedness plan.

The ReadySanDiego website, found at www.readysandiego.org has information on defensible space for local homeowners as well as evacuation tips, interactive maps and checklists, and templates for creating emergency Go bags.

Residents can also download the Alert San Diego application from the Ready San Diego site to receive real-time information and updates, as well as monitor emergency information at www.SDCountyFire.org and www.SDCountyEmergency.com, and follow @ReadySanDiego and @CALFIRESanDiego on Twitter

for current information when a wildfire does break out.

“Our region received little rainfall this year, so fuel moistures is at or near critical levels countywide. Any fire this time of year has the potential to devastate our rural communities with the right conditions,” Shoots said.

Furthermore, he said, those large fires require resources during and afterward, and can have a lasting financial impact on the region as well as devastating habitat areas, hiking trails, and San Diego’s unique ecosystem.