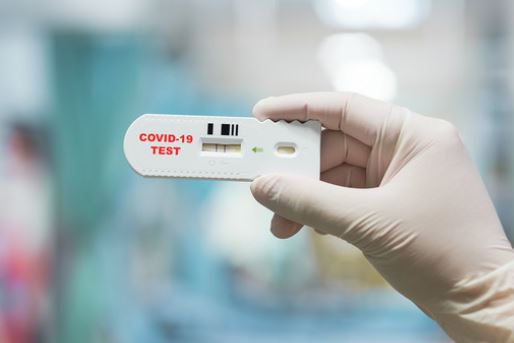 What the former Palo Alto Research Center Electronic Materials director with advanced degrees in physics from the University of Cambridge found was concerning to him.

A chart he constructed for the 91901 zip code has pinpoints showing breakouts which he said clearly indicates cases are doubling every two weeks in Alpine.

“In looking at data, scientists want to see a curve with some underlying feature to it that explains what’s going on. Usually one person will infect two or three others and so on and it gives you increasing numbers. So if you plot the same data as a logarithm to Base 2— and the reason to do that is to see if the thing is growing exponentially— you can see how the curve fluctuates on the graph,” Connell said.

The first reported case of COVID-19 in San Diego County was on March 9, 2020 and in the early days of the virus’s spread Alpine did not have a high case rate. But Connell’s research show local breakouts began about a year later in the Spring of 2021.

Cases took off dramatically after that point and are connected by what Connell describes as a “lumpy” line on the graph that tracks upward, indicating breakouts continued to happen and cases were not actually under control.

Connell made two observations from the breakout points he charted as an overall ascending line: that March 2021 is the last point where case rates appear to be under control, and that case rates, which appear to increase in small jumps up the ascending line suggest one contagious person can spread COVID to multiple people at a single event.

Widening the scope beyond Alpine, to surrounding areas throughout East County shows a similar pattern: case rates clearly are on the rise.

While a broader view does not show East County experienced the same kind of biweekly doubling that Alpine did, it still reveals cases clearly increased from June to September and more than doubled from July 4 to July 10.

Whether Alpine residents track data in the 91901 zip code as Connell does or widen their view to the entire East County region, the same general uptick in cases is evident.

San Diego State University Interim Director of Public Health Eyal Oren, an associate professor in Epidemiology and Biostatistics said determining what the numbers mean, or what the data reveals “very much depends on what you’re trying to figure out” and what one is trying to accomplish.

“On the data gathering side, are you trying to look locally, for example at one population being affected versus another? There could be a lot of motivations for the granularity of the data,” Oren said, without looking at Connell’s Data.

For Connell, his Alpine-centric research, illustrate exactly what COVID-19, along with its Delta variant, means in just one zip code.

“When we stopped seeing cases rise at the end of February, we thought we’d licked this thing. We were getting one case or less per day and everything was opened around June 3. The English and American data is not quite the same but Delta is roughly 2-3 times more contagious.

Instead of infecting two or three people, one person is infecting 5-7 people. So then, we see this big takeoff,” Connell said.

The “rallying call,” Connell said, should be that “we almost got this done” and while Delta was ill-timed, everyone has to do what they can to not propagate the disease.

“If you think about how you want to set up a testing center, the county data would not be granular enough… If you go too local, if you can imagine, like looking at a small outbreak in a church or school, then it’s not necessarily representative,” Oren said.

Although there is “a lot of leeway in terms of different policies”, Oren said, the safest route would be to recommend a single policy that covers everyone, like wearing masks and distancing.

Sweeney said East County has been an area of focus for Countysponsored broadcast and digital efforts. The County, she said, ran ads in July and August on Pandora, YouTube and KOGO radio in an effort to dispel misinformation.

“There are currently 14 contractors dedicated to augmenting COVID- 19 education and outreach efforts throughout the county, and five of them are active in East County. Some of the 14 contractors are focused geographically, while the other portion focuses their efforts on specific populations,” Sweeney said.

Certainly, Connell said, the County tries to educate the public however he does not believe residents grasp the severity of rising case numbers.

“The county puts out information but one might think it will go over people’s heads. If people can understand (cases are) doubling every two weeks…,”

Connell said, his voice trailing off.