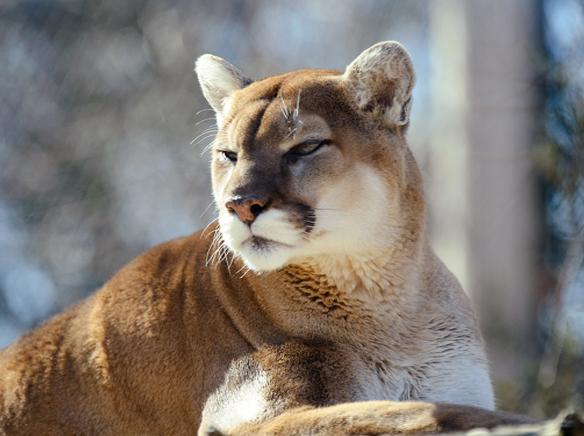 Parks, a retired Naval Criminal Investigative Service special agent, said he originally started giving the educational presentations to law enforcement agencies because he “can find a frequency to talk with them” but then expanded his lectures to public education, hiking clubs, animal rights groups, the Sierra Club and other organizations with an interest in wildlife.

“From the big picture working down, throughout California, there is so much pressure being put on mountain lions because we keep taking away their habitat. They often have to go closer to humans and it causes conflict and concern. Steadily over the past five years and especially over the last year there have been more sightings and encounters throughout East County,” Parks said, including regular resident lions in far East County like Descanso and Pine Valley as well as Lakeside and Poway.

The mountain lion population is not increasing, Parks said, but people might be spotting the big cats more often because they have nowhere to go.

Typically, Parks said, he spends some time talking about misconceptions including the fact that there has been no increase in mountain lion statistics. In fact, he said he is familiar with several studies which indicate that “at the current rate of decline, mountain lions in south Los Angeles county will just be gone” and although the largest problem is environmental pressure, the second issue is genetic diversity.

“There are mountain lions here in San Diego county that want to try to go to the Santa Monicas to find a mate and can’t get up there with so many highways and people. What is happening here in San Diego county is lack of genetic diversity, inbreeding causing anatomy and medical problems like hip and joint problems and that kind of problem can only go on so long,” Parks said.

The Mountain Lion Foundation advocates for coexistence, suggesting residents take initiative to protect families, pets, and livestock, as well as the native prey and habitat of mountain lions, rather than reacting violently after a hungry cat has taken advantage of a lack of preparedness.

Mountain lions are legally protected, he said, but his main argument for coexistence is protecting a healthy balance of nature.

“Some of those laws on not hunting mountain lions started back with Ronnie Reagan… Mountain lions are an apex predator at the top of the system and when we remove them, it affects everything down the line and the entire population gets out of whack,” Parks said.

In a normal environment, a healthy apex predator population means a healthy balance of nature, he said, and dwindling mountain lion numbers are cause for environmental concern. Tamper with predator, Parks said and you’re also tampering with the numbers of their prey, including coyotes which “are tasty” and will continue to multiply without mountain lions seeking out their dinner.

In actuality, very few human deaths are due to mountain lions, he said.

“Since about 1895, there have been about 27 fatalities in the United States and Canada due to mountain lions. I’ve faced many audiences where there is concern about local mountain lions because they’re scared for small kids but more kids die from gun violence than any other cause in this country,” Parks said.

In addition to overzealous and unnecessary hunting, Parks said, rodenticide poisoning is a significant factor in mountain lion deaths.

“I often team up with some other folks at the Wildlife Research Institute who work with hawks and raptors as well as mountain lions and one of the big things they’re involved with is educating people about the effects of rodenticides. For the most part, the Department of Fish and Game tries to do necropsies and almost every mountain lion they find in California has some degree of rodenticide poisoning. Remember, they’re the apex, they’re at the top so bobcats, raccoons, everybody struggles with rodenticide poisoning,” Parks said.

“You can’t wave a good steak in front of a mountain lion and not expect it to want dinner,” Parks said.

However, there are simple and fairly inexpensive ways to establish countermeasures so mountain lions don’t come near one’s yard, all based on what is or is not welcoming to a mountain lion with no need for aggressive measures.

“Mountain lions avoid people whenever they can; they don’t like the sound of human voices. There have been studies done using talk radio to deter them from coming near. One set of experiments used Rush Limbaugh and the other used Rachel Maddow and they both were effective. Place an old-fashioned radio on a fence post somewhere set to talk radio, nothing loud enough to bother the neighbors— a mountain lion hears that sound about 30 miles before we can and tends to stay away,” Parks said.

Motion activated water sprinklers are another easy solution, he said. Although mountain lions aren’t afraid of water and have no problem crossing rivers or streams, they don’t like to be sprayed with water.

There are other easy steps homeowners can take to keep the cats away, Parks said, some of which will be addressed at the upcoming library lecture.

This particular lecture is not designed for kids, he said, with some “tough photos” on hand but the foundation consistently presents kid-friendly lectures which include showing younger attendees the type of cage where a mountain lion can be safely trapped and transported to safety. A more kid-friendly lecture is forthcoming, he said.

Visit www.mountainlion.org to learn more about mountain lions and coexistence. 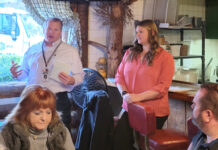