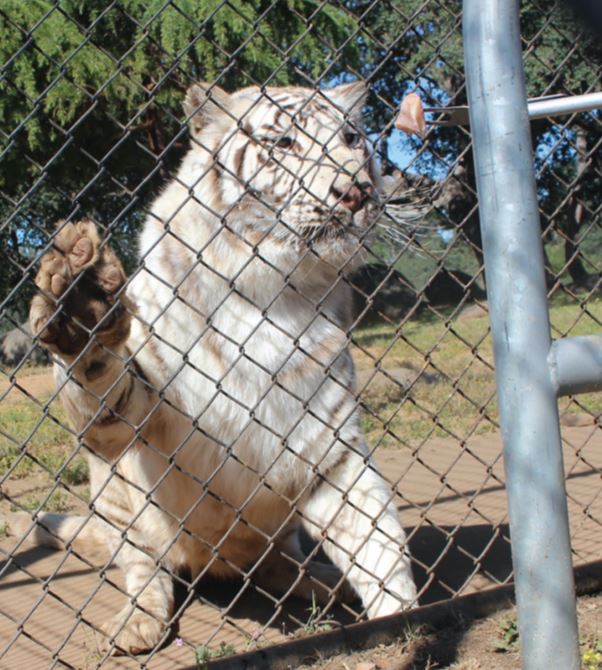 Lions Tigers and Bears is holding its annual gala in person on May 21 after two years of hosting virtual events due to COVID-19. The Diamonds and Denim themed event will feature an evening on site at the animal sanctuary in Alpine with all proceeds going to support rescued animals who live at the facility.

Founder Bobbi Brink said the gala will especially help offset the quadrupled cost of building due in part to supply chain issues.

“It’s crazy. We have to rebuild the wood platforms all the time and used to be able to do it for about a thousand bucks but it’s like four thousand dollars for the wood right now. We wanted to build a platform linking these two tigers, but when we got a quote for the wood, it was like $25,000 to build what we had built for five grand before,” Brink said but there is no skimping on supplies as it has to be big and sturdy enough to support tigers.

A full animal habitat can cost anywhere from $100,000 to $1 million to build, Brink said, and raising the funds can be challenging but they earmark each fundraiser for different projects to keep tabs on what they can accomplish. Although Brink began building out the facility in 2002 and opened to the public in 2009, she came from hospitality management and is strategic about development.

She first learned about the exotic animal trade in Texas while flipping through the classified section of a local newspaper in search of restaurant supplies. After visiting a lady who bred leopards in her trailer home to sell for profit, Brink began noticing similar ads. She learned there are states which require a dog license but no license to own a tiger.

The pay-to-pet industry where people are photographed holding a baby tiger is profitable, she said, but big cats grow fast and once they appear too old, the cats are disposed of. Brink and rescue staff are on a constant mission to prevent animal cruelty; exotic animals that are no longer profitable are frequently sold to hunting ranches where they are shot and taken home as a trophy.

“When I first started, all these photo op places were giving their leftover surplus animals to supposed sanctuaries but they would get full and they weren’t true sanctuaries. The problem was getting worse. A lot of animals can’t be tracked— they disappear out the back door and nobody really looks back,” Brink said.

At this point, Brink said, it is hard to determine how many animals are involved and where they’re going.

“These are big animals and you’ve got to have a place to put them so we go slow: one animal at a time and one rescue at a time, and we try to work together with other sanctuaries when they do have space; sometimes we do have space like when another animal dies or we’re able to build something. We just do the best we can to get everybody placed for every rescue that we work on,” Brink said.

Lions Tigers and Bears partners with Big Cat Sanctuary Alliance, a non-profit organization which works to eliminate private ownership and the commercial exploitation of wild cats in the United States.

The exotic animal industry thrives on money and profit, Brink said. Tenaciously, she and staff advocate for legislation like the federal Big Cat Public Safety Act which was introduced in January 2021 but has not yet passed in the House of Representatives or Senate.

“It would stop the cub-petting and some of the unnecessary breeding, but I still think the surplus animals need to be provided homes before they become surplus. People who breed animals need to be responsible for the animals that they breed,” Brink said.

Brink and her team pepper casual conversations with factual information about the animals: white tigers are usually cross-eyed as a result of inbreeding, neutered lions lose their manes, there are now more tigers in captivity than in a native environment.

Since she rescued Raj and Natasha— the first two tigers who came to the sanctuary from a six-by-ten cage in Alvin, TX— Brink has learned “there’s always an obstacle so you just have to keep pushing forward, get through it” whether the obstacle is a building permit or a death threat from animal breeders who don’t want to see their business shut down.

After 20 years in rescue work, Brink said, she has learned to “listen to the animals,” practice patience and raise funds.

“Insurance costs are very high, so are utilities. We’re working on getting solar right now, which will help with the high electric costs,” Brink said.

She listed off strategic ideas for how everyday residents can help support rescue work, such as volunteering, sharing their information on social media, or writing to legislative representatives as an animal advocate.

The May 21 Denim and Diamonds gala, Brink said, will “raise money for a lot of veterinary and operating costs” and includes a fun dinner show with Neil Diamond impersonator Rob Garrett, a silent auction, an open house and animal feeding during a VIP hour.

“Hosting the event in person after two years is— you know, I think you’ve got to see these animals to really understand. When you come out here and you see and meet that animal you learn what they’ve gone through and you feel it. You’re touched by it,” Brink said.