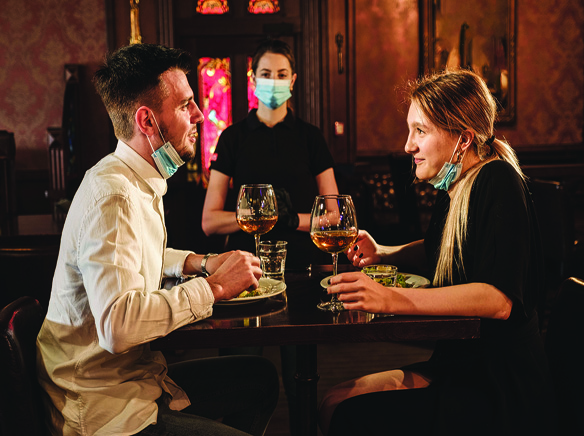 The face mask has come to symbolize a political divide between citizens who say the practice infringes on their per­sonal rights and people who believe they are looking out for everyone around them based on Centers for Disease Control and Prevention directives dat­ing back to April 3.

Does an unspoken social con­tract with society demand we cover up and politely distance or does individual freedom su­persede the collective need?

Southwestern College Phi­losophy Professor Peter Bolland said he believes the argu­ment that wearing a mask is merely a ‘personal choice’ is a juvenile misunderstanding of what liberty really means.

“Liberty does not mean do­ing whatever you want as if you exist in a bubble. No right is absolute. Rights are always married to responsibilities,” Bolland said.

He takes issue with politi­cians who frame the practice of wearing a mask as being done out of fear and said he is “baffled” that a question of sci­ence could be converted to an argument on whether wearing a mask is a personal choice.

“One of the themes that has been a through line in all this: we’ve seen an erosion of faith in expertise. There’s this sense that we’re not to trust educated people, that there’s no differ­ence between One America News and the New York Times and I don’t know how to combat that because you can’t offer evi­dence to conspiracists,” Bolland said.

Grossmont Philosophy Pro­fessor Leila Parello is less worried over whether asking people to wear a mask has legal weight and is more concerned with what the directive to dis­tance might mean for the na­tion.

She is especially concerned that the practice of education is being rapidly and negatively affected by mandating student distancing and relying on dis­tance tools for learning.

“If students are kept away from each other indefinitely, it could grow to be an enormous handicap— learning and knowl­edge have a great deal to do with being able to coordinate yourself amongst the objects in space and time, not just looking at a screen and dealing with a representation of a representa­tion,” Parello said.

Because learning online is done primarily through the use of a program that she said “is in itself a filter,” online learning requires students to behave and respond a certain way, remov­ing the freedom to interpret or imitate reality like they would do in person.

Imitation is required to truly learn, Parello said, a concept she says “philosophically goes all the way back to Plato and the imitative art”.

She worries the ability for people to independently think and develop is going to be cur­tailed if students cannot inter­act in person.

Like Bolland, she is con­cerned the American public does not distinguish between science and hyperbole. She per­sonally questions whether the American public is being given the entire truth but says the fact that there is widespread mistrust is in itself concerning.

“We’re mandating behaviors that insert mistrust into civili­zation and once we do that, how do we get rid of it? Once you change the structure of civili­zation and communication, it is hard to undo those changes, to go back to trusting,” Parello said.

Secular Humanist Jason Frye leads a group of about 30 to 40 philosophers in a weekly talk. Frye said he and fellow human­ists “think of the philosophy behind why a lot of people act in certain ways and examine things in a deeper sense, like cognitive science.”

He said his background in Political Science coupled with that humanist outlook provide for a nuanced answer.

“The more libertarian per­spective would say we have to place individual freedom above everything else. The idea is ‘If I don’t want to wear a mask, nobody should force me’ but that’s incredibly short-sighted because basic cost analysis would suggest that even if you don’t catch it yourself, the virus is going to be running rampant and from a public health stan­dard there will be shutdowns. So, if you don’t participate in wearing a mask, it will take longer to get back to normal. Therefore, if you want your life back, wear a mask,” Frye said.

He then pivoted and ap­proached the question from a social science standpoint.

“To say it’s just ourselves against everyone else is a rather impoverished way of looking at the world, impoverished in the regard that we know from psychology, from philosophy and from our own experience that we find our greatest meaning in relationships with other people and we want to have our friends and family around us in great health for a long period of time. Therefore, if we want to see our friends and family members safe, not catching this virus, wear a mask,” Frye said.

Finally, he approached the question as a political one.

“In terms of patriotism, if we want to consider ourselves patriotic, we have a duty to be good community members and to maintain our parks and civic resources, a duty to influence good behavior on younger peo­ple and a duty to do our part and secure a better future for our country together. Part of that duty is to help the health of our nation, therefore wear a mask,” Frye said.

Ultimately, he said, a soci­ety only works when everyone keeps everyone else in mind. Like Parello, he said suspicion and mistrust lead to the down­fall of society.

“If you want to place a value on everything, which we as peo­ple do inherently, a society with trust and volunteerism and care is far more valuable than a soci­ety with suspicion and anxiety because that is not a world any­one values enough to want to live in,” Frye said.

Regardless of how one gets to the endpoint of their reason­ing, Frye said, all the paths come back to the fact that we’re far less likely to contract CO­VID-19 or pass it on to others if we are masked.

Where Parello made the dis­tinction that “there is a differ­ence between dying from COVID or with COVID,” Frye said the death factor is low but the trauma to survivors is high. He steps aside from philosophy and said he is worried for the number of people who have long-lasting physical and physiological ef­fects, whether it is the person who had COVID or those who love them.

“One of the things we don’t talk about too much is the six year old girl who had to say goodbye to her grandma with­out seeing her, or the individu­als who have ongoing cardio­vascular problems and might eventually need a lung trans­plant,” Frye said.

Referencing 18th century philosopher Immanuel Kant, Frye said if we are to consider the needs of the many over the needs of the few, a consequen­tialist way to pose the situation suggests ‘everyone should go back to work to keep the econ­omy going so wear a mask and that way we can get back to work sooner’ and that will like­ly produce the greatest amount of happiness and benefit the greatest number of Americans.

Bolland also referenced Kant and, using the philosopher’s reasoning, said we wear masks not to protect ourselves but to slow the spread and protect the most vulnerable among us.