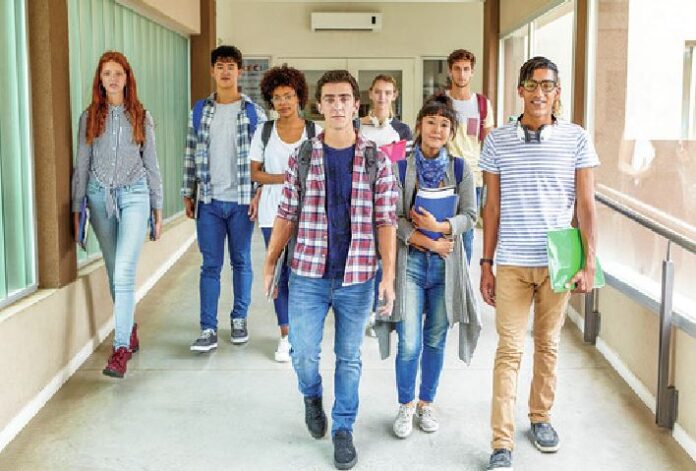 Grossmont Union High School District Board of Trustees approved an updated dress code upon first reading at a Dec. 13 meeting.

The policy, which as last revised in 2004 was updated to reflect California Senate Bill 188, which prohibits discrimination against traits historically associated with race, including hair texture and hairstyles such as braids, locks, and twists.

Although the district maintains a general dress code policy that adheres to state law, each high school in the district uses the district code as a starting point and has a slightly different policy listed on their website or contained within Student Handbooks.

GUHSD Student Representative to the Board Faith Langteau, who is a senior at El Capitan High School, said there has been confusion on campus regarding dress codes in recent months with students who are no longer sure what rules to follow or where to find current policy.

A lunchtime Dress Code protest on Sept. 13 at Grossmont High School devolved into a food fight that escalated until school officials called for support from law enforcement officers and secured the campus, and several petitions have circulated at district school since then, many calling on schools to put less onus on female students to cover up in the heat of East County and more responsibility on administration to address gender bias.

Just four miles across Santee, West Hills High School’s policy forbids “garments displaying logos of racist groups or juvenile gangs, including red shoelaces” as well as symbols of hate, prejudice, intolerance or discrimination but does not mention Nazis, or the Confederate flag.

Something as simple as a hat can have different rules from campus to campus. The same beanie which is entirely forbidden at Monte Vista High School during school hours may be worn in classrooms at Grossmont High School as long as the teacher permits it and the hat does not cover a student’s eyes or ears.

As the updated dress code also states “students shall not be prohibited from dressing in a manner consistent with their religious or cultural observance,” rendering headscarves both permitted and forbidden, depending on which rule is applied.

Similarly, a do-rag, a head covering specifically disapproved on the El Cajon Valley High School website is historically associated with Black culture and is usually worn to protect the same braids that are now legally protected under SB188.

The district dress code approved Monday states it “shall not be enforced in a manner that discriminates against a particular viewpoint or results in a disproportionate application of the dress code based on a students’ race, ethnicity, household, income or body size or type” yet students at Grossmont High School are not allowed to wear either oversized or overly form fitting shirts which might be somewhat dependent on their body size or type.

Assistant Superintendent of Educational Services Mary Beth Kastan asked Langteau if she had any suggestion on how to effectively push the updated dress code out to students.

“Letting it be known that we have reviewed the dress code would be easier than trying to push changes to students,” Langteau said.