When Linda Cioffi talks about her Quest for the Cure, her Alzheimer’s San Diego fundraising team, she rattles off accomplishments with an intensity that comes from being dedicated to Alzheimer’s research.
With about four months to go before the annual fundraising walk held by Alzheimer’s San Diego, Cioffi’s fundraising team Quest For the Cure this year is trying to raise more than the $82,000 it brought in last year.
“We’ve raised $30,000 already this year. It’s phenomenal what people can do when they’re dedicated to a cause,” Cioffi said.
Cioffi is confident the group will hit their current goal, in part, because of the Monarch Club, a select group of individuals within the larger Quest For the Cure team who raise more than $1,000 annually apiece for the team.
Cioffi’s advice for anyone trying to raise a comparable amount: ask 20 people for $40 and if they can’t spare that amount, wait and ask again.
She also claims the dollar amount being requested is not what determines results; she insists that it is the passion of volunteers when they solicit donations.
Cioffi spends 10 months out of the year planning for fund-raiser that has grown in size.
The initial fundraiser held at the Alpine Beer company has grown into an annual event at the Alpine Community Center, which is being held this year as Alpine’s first Oktoberfest.
All proceeds from the event will be given to Alzheimer’s San Diego, Quest for the Cure’s preferred Alzheimer’s research organization.
Cioffi said her team specifically supports the San Diego-based non-profit organization over national groups because they spend less than 10 cents per dollar raised on overhead and all money is kept in San Diego.
The Quest For the Cure team participates annually in the Walk4ALZ held by Alzheimer’s San Diego and was recently honored at their Visionary Luncheon for their notable fundraising efforts in advance of this year’s event.
“Linda Cioffi is a force of nature. Her tireless drive to help San Diegans dealing with dementia comes from a deep place of compassion and empathy. Alzheimer’s San Diego is lucky to have her on our team,” president and CEO of Alzheimer’s San Diego Eugenia Welch said. 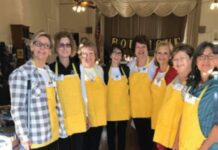