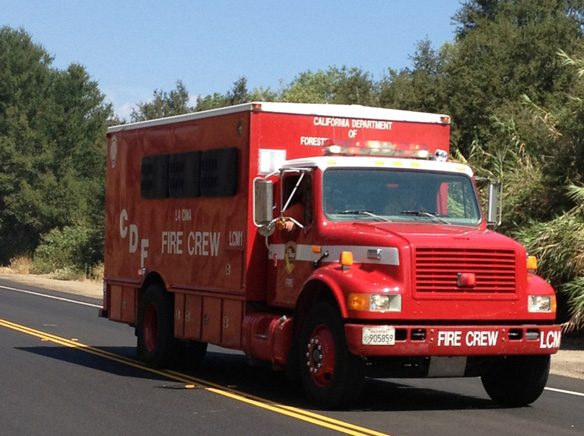 The Alpine Fire Protection District Board of Directors unanimously adopted a resolution two days earlier opposing the new fees of $150 per residential building in forested or wildfire-prone areas. The $126 million raised would support state fire prevention efforts, officials said.
The SRA fees would impose an additional financial burden without providing additional fire services for Alpine residents, who already get fire prevention services through the local fire district, according to the board.

“There’s some new legislation that just came down at the state level,” Alpine Fire Chief Bill Paskle said Tuesday. “This could all be over by Friday.”

Friday, Aug. 31, is the deadline for any pending state legislation to pass before the legislators recess for this session.

The fees also apply in the Mountain Empire and other rural areas of the state.

Paskle said Senate Bill 1040 and Assembly Bill 1500 both have to pass in order to provide a tax formula applying to corporations that would raise about $1 billion for the state.

Part of that money, intended for college scholarships, would be used to cover the state firefighting prevention needs and eliminate SRA fees, the fire chief said.

He said about 1,000 homes in the Alpine fire district are affected by the SRA fees. Statewide, the figure is estimated at about 1 million habitable buildings.

Jim Archer, an Alpine fire board member, said he “absolutely hopes” the proposed legislation will pass.

“We’re taxed enough in a rural area because we have secondary costs that people in a city don’t have,” Archer said, citing fire protection, water and other basic needs.

Another Alpine fire board member, Jim Easterling, said he thinks “we all feel strongly those fees are not a legitimate charge, at least the way they’ve been presented.”

Lakeside Fire Chief Andy Parr, whose district also has residents subject to the SRA fees, said that district doesn’t understand “what we’re going to get for the money.”

“This is a multi-faceted problem and Lakeside sees it from many different sides,” Parr said. “The board takes an opposed position as it limits our opportunities for the future.”

The Alpine Fire Protection District as well as the Fire Districts Association of California have actively opposed the SRA fees bill since the idea was presented a few years ago to raise money for the state to fill its budget gaps.

“The Alpine fire district does not benefit from this (fee) at all,” Paskle said. “All of the money from the fee goes to CALFIRE (California Department of Forestry and Fire Protection) to support their fire prevention efforts.”

Alpine fire district residents have a local benefit fee of $35 which would bring an individual SRA fee down to $115 per building, but “these homeowners already pay local taxes for year-round fire prevention and protection services,” the Alpine board said in a statement after its vote.
“If it is the will of the State Legislature to reduce the burden on the State’s General Fund for CALFIRE costs, an alternative and more equitable mechanism is necessary,” AFPD Board President Steve Kramer was quoted in the statement.

The board noted that for decades California’s Master Mutual Aid System, a model for the rest of the nation, has inspired local fire agencies and the state to work together.

The SRA fees will jeopardize that collaboration, the Alpine fire board held.

“Local fire agencies are concerned that with the implementation of the SRA fees, any future measures supporting local fire protection, prevention and paramedic services will simply not be approved by voters on top of the SRA fee charged by the state,  putting the local agency and its constituents at risk,” the board’s statement said.

The SRA fees will be billed by the state.  The SRA fees are not related to an increase of $1.67 in the annual benefit fee for the Alpine fire district for the 2012-2013 fiscal year.

When the Alpine fire board approved the benefit fee increase in February it cited a fiscal emergency declared earlier and a 2.7 Consumer Price Index increase in 2011.

The annual benefit fee increase would bring the fee for a typical home in Alpine to $63.59 a year, according to fire district information.
For more information, call the Alpine Fire Protection  District at (619) 445-2635 or visit its website at www.alpinefire.org.