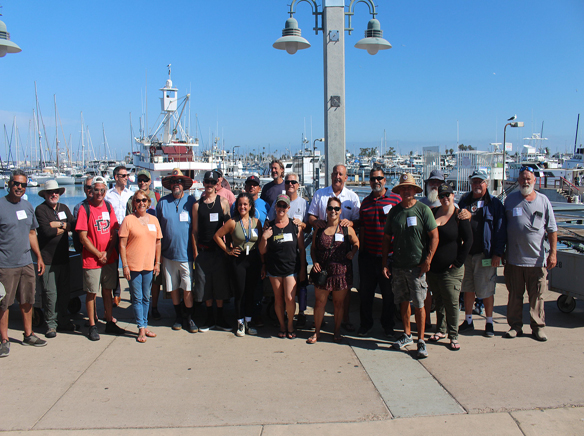 More than 20 volunteers with nonprofit Meals on Wheels San Diego County sailed out of Fisherman’s Cove on July 18, determined to reel in fish and funding for the senior meal service in their annual Fishing for Charity event.

Current Meals on Wheels President and CEO Brent Wakefield said the three-day trip is designed as a fundraiser with sponsor organizations donating needed dollars to the organization, but also serves to bring in fresh fish used in meal preparation and later delivered to seniors across the county.

Touting the orzo fish salad which will be dropped off at homes from El Cajon to Chula Vista, Wakefield said one in ten seniors in San Diego county experience hunger and many get by on convenience foods which are within their budget but compound health problems.

“We’re very aware of ‘the hidden hungry’ who can afford a slice of pizza or a hot dog from 7-11 but not much else. We address not just food insecurity but also nutrition,” Wakefield said.

According to their statistics, Meals on Wheels San Diego County delivers 50,000 meals per month. As with most social services, Wakefield said, success comes from the combined effort of multiple agencies.

“The numbers are just so high and it isn’t just us at work, its Jewish Family Services, Serving Seniors, Catholic Charities. Feeding San Diego helps us to sign seniors up for CalFresh so clients are spending half as much. San Diego Gas and Electric provides shelf stable foods when they know they’re going to shut down power in an area,” Wakefield said.

While fishermen and women milled about the dock and waited for the sport-fishing boat Shogun to open up for boarding, Case— who goes on the trip each year— described the event as a sort of reunion for participants each year.

“It has grown so much, we don’t even have to advertise. The same people usually come out and we all look forward to it each year. And, the bottom line is everything we get done is going to Meals on Wheels so it is for a good cause,” Case said.

Michael Bernard, a volunteer who has been out on the trip three times said he’s had “not one catch” at times but continues to go for the camaraderie and the good cause.

Case said the fishing trip is “an amazing program” but the organization and all nonprofits “need to keep talking to people, reminding them ‘don’t forget us’ because presence is critical.

Still, there is a rhythm to each fiscal year, according to Wakefield, and the nonprofit has to consistently balance fundraising and planning efforts.

“In summer, fundraising slows down so we use the time to get focused. Summer is a lot of looking at budget alerts. This June, we had a very successful gala— although it was smaller with things still a little off from the pandemic, we raised a little bit more than we usually do,” Wakefield said.

As the pandemic wanes, Wakefield said they’re seeing a consistently growing need among seniors and the funding came at a crucial time.

“We’re not turning people away but we’re also not doing outreach,” Wakefield said, as people frequently come to them in need.