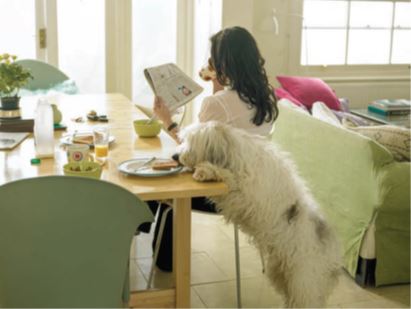 October is National Pet Obesity Month with Oct. 13 recognized as National Pet Obesity Day. The Association for Pet Obesity Prevention reports that more than half of the nation’s dogs and cats are classified as overweight or obese by their veterinary healthcare provider, and places pets at a higher risk of major health conditions including osteoarthritis, diabetes, respiratory problems, and cardiovascular disease.

Some of the worst foods for dogs are onions, garlic and chives, chocolate, macadamia nuts, corn on the cob, avocados, artificial sweeteners, alcohol, cooked bones, and grapes and raisins.

Headquartered in Berkley, California, Wild Earth’s cofounder and CEO Ryan Bethencourt pitched his idea for plant based dog food to “Shark Tank” in 2019 and left with a deal with billionaire Mark Cuban to get his startup company. Now, Wild Earth creates dog food, treats, and supplements with around 40,000 customers nationwide. Bethencourt said the company’s focus is on optimizing health nutrition for pets. With the holidays coming with Halloween candy, and large Thanksgiving and Christmas dinners, he said feeding pets table scraps is not a good practice. He said this can be especially hard when you have family and friends over for the holidays.

“They all beg, so you might not even be aware of the food that they are getting, because a friend or family might give them something because they feel bad, and they just want to make them happy,” he said. “It means being mindful that your pets are always wanting to eat more foods than they normally should. One thing to watch out for is candy. Chocolate is toxic for dogs, and that is something all pet parents do not know.”

Bethencourt said the best thing for pet parents to do when it comes to the health of their pets, is checking with a veterinarian, especially new pet parents that took on pets during the pandemic.

“Pet obesity is challenging because fat dogs and fat cats are very cute,” he said. “There are plenty of Instagram and TikTok memes of fat dogs and cats, and I think we all find them very cute, but the problem with pet obesity is as they get older, like us, they suffer similar problems like we get. They get diabetes, arthritis. As they get older, it increases that risk of getting various ailments that people also get that have an increased risk due to obesity. If you want to keep your pet healthier for longer, focus on diet and exercise and keep them at a healthy weight.”

Bethencourt said he thinks it is challenging in determining whether your pet is overweight, and it is not a popular or fun thing to talk about. He said in most cases, people have so much going on in their lives, that overweightness in your pet “kind of sneaks up on you.”

“I talk to many pet parents, and they know that they have a problem, but they do not know how to deal with the issue,” he said. “There are websites that help you determine what the healthy weight is for your dog or cat, and different ones have different healthy weights. My dog is a German Shephard, and she weighs about 80 pounds, and that is okay. But if you have a 30 pound chihuahua, that is a bad situation.”

Bethencourt said most people can look at their pet and determine whether it is overweight, but today, most people depend on the internet, just as they do for their own health before going to the doctor.

“One of the best things, just like us, is diet and exercise,” he said. “Focus on feeding your pet healthy food. We have seen a shift on how we are feeding our pets, and that is one reason I started Wild Earth. I was not happy with what I was feeding my dogs, and so I decided to create something that was more in line with what I like to eat. I am plant based, and I wanted something healthier, and plant based for my pets, and I was not happy with what was out in the marketplace. There are some other great foods out there, so it does not have to be plant based, but there are a many great options that are healthier options for our pets.”

Bethencourt said especially with dogs, it is important that people understand that they are omnivores, not carnivores. A biologist by background, he said he fascinated with the history of homo sapiens and their pets. He said dogs have evolved with humans between 25,000 and 50,000 years, by their sides while hunters and gatherers, and as humans began growing crops and became agrarians, so did the biology of dogs.

“When you look at their biology, it is different from even wolves as they have more enzymes that break down carbohydrates,” he said. “Dogs are omnivores. Dogs in India eat table food, but it is all vegetarian.”