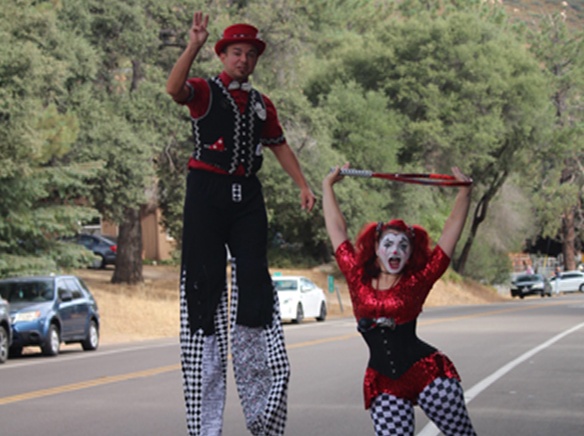 This year’s Pine Valley Days parade included princesses on horseback, clowns on stilts, reenactors in a horse-drawn wagon, Girl Scouts, Smokey the Bear and an unexpected appearance from Santee Mayor John Minto, all making their way down Old Highway 80. The sound of bagpipes and drums faded into the clippety-clop of the Victorian Roses’ horses shoes followed by motorcycle engines from the Patriot Guard, the ringing brass of Mt. Miguel’s Alumni band and sirens on the law enforcement vehicles which took tail end of the July 30 parade.

Warming up before the parade with her fellow Cameron Highlanders, Susie Shoemaker said they attend many local parades but “the Pine Valley parade is one of my favorites because it’s hot and short” and always fun.

Although Pine Valley Days began on Friday evening with a deep-pit barbecue feast at the county park, families came out en masse for the Saturday morning parade, lining the rural street with folding chairs, young children in tow. Three year old Zaley said she was there to “see the horsies” as well as wave to her sisters who would be riding the Girl Scouts float as Brownies while Zach, 7, clutched a grocery bag, “for candy” he anticipated would be tossed from the floats.

Sure enough, candy was tossed into the crowd from various parade participants although the U.S. Forest Service chose to instead gently spray water into the gaggles of sweaty children while Smokey the Bear paused at regular intervals for high-fives from kids of all ages.

Mountain Empire Men’s Club Secretary Patrick Duggan, a key organizer of the event, said they really “catered to the kids” this year with bounce houses to replace the usual water slide but also made sure there was a full Friday night of entertainment planned for the whole family.

“We had the band going at least until 9:30 at night when I packed up and headed home. I’m sure many people stuck around much longer. We have the deep pit barbecue dinners for sale but people can bring their own food in as well and stay as late as they’d like, have fun with their families,” Duggan said in his thick, Aussie accent.

This year, he said, they “threw in 120 pounds of chicken which flew out like hotcakes” but otherwise did not change a thing about the deep pit barbecue the club assembles each year.

While they did have a slightly lower number of registered vendors than usual, the event added a beer stand with kegs of brew for adults and glow sticks for kids all donated by McIlhenney Brewing, a family business in neighboring Alpine.

Besides adding in the beer stand, however, the event is almost identical to years’ past, Duggan said.

All proceeds from food and beverage sales, t-shirt purchases and financial donations are put toward scholarships the Men’s Club hands out every year to Mountain Empire district schoolchildren.

Scholarship Chair Tom Barrett stood behind a table stocked with tshirts for sale and said the club has funded new jerseys, sports balls, and community outreach events over the years but will hear out any request.

“We try to make sure no kid is ever turned away; this last year we gave out just shy of $20,000 we put together from this and other fundraisers,” Duggan said.

Although the pandemic proved challenging, “a bit hard on local business owners”, Duggan said the club managed to raise funds and stay involved with the community.

“Really, after six years of doing this, I’ve got the pattern down and would like to do more community events,” Duggan said.