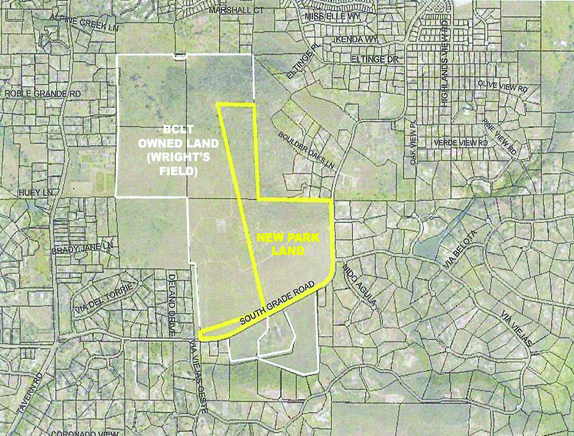 After several decades of resi­dents trying to get an appro­priate public park in Alpine, San Diego County officials are moving ahead on a proposal.

The San Diego County Board of Supervisors voted 4-0, with one supervisor absent, on Jan. 9 to set a Wednesday, Feb. 13, hearing date to buy 98 acres off South Grade Road for a county park and recreational facilities in the mountain com­munity..

Most of the privately owned property that would be ac­quired abuts popular Wright’s Field, the 230-acre Back Coun­try Land Trust natural pre­serve in the heart of Alpine.

“This endeavor has been challenging to say the least, as we’ve worked roughly 20-years trying to identify a suitable piece of property that could serve the recreational needs of the community,” Supervisor Dianne Jacob said in prepared remarks. “However, issue after issue (location, access, price, etc) popped-up and put a stop to any such efforts.”

Now, Jacob said, the county is finally building a park and the community will have an opportunity to “contribute to the design and amenities of this park, as the Department of Parks and Recreation will hold multiple public meetings to receive community input.”

The Back Country Land Trust (BCLT) maintains Wright’s Field, which is open to the public for hiking, bik­ing, horseback riding, dog walking, stargazing and edu­cation.

“BCLT applauds the county and Supervisor Dianne Jacob for moving strongly with plans to secure additional parkland for Alpine,” BCLT Director and Officer George Barnett said in a statement.

Barnett said the land trust has contacted the county “and expressed every willingness to work with the county on ensur­ing both contiguous properties work well together in terms of community access and passive enjoyment.”

Jacob said that in addition to the Alpine Park project, she fully supports the community

Dianne Jacob said in prepared remarks. “However, issue after issue (location, access, price, etc) popped-up and put a stop to any such efforts.”

Now, Jacob said, the county is finally building a park and the community will have an opportunity to “contribute to

“There is no question in my mind that we can do both and each project can complement one another,” the East County supervisor said. “There does not need to be any competition between projects.”

According to the county’s fis­cal impact report, funds for the park are included in the Fiscal Year 2018-19 Operational Plan in the county’s Capital Outlay Fund.

The rest, the report said, would be for staff time, apprais­al review, closing and title costs and $2,000 in one-time land pro­tection costs

As outlined in the report, the total estimated annual ongoing cost for the proposed park would be $75,500.

The property acquired for the Alpine county park would be de­veloped with one part “an active park and to conserve a substan­tial portion of the property as open space,” the overview said.

If the park proposal is ap­proved, the next step would be for the county “to complete a thorough analysis of the land to determine what areas can be designated for active recreation,” Jessica Geiszler, county Parks and Recreation market­ing and public outreach manag­er, wrote in an e-mail response to Alpine Chamber of Commerce questions.

“It’s actually too soon to tell how the park will be laid out,” Geiszler said. “Once the team has completed an environmen­tal review, they will present their ideas based on things like landscape, incline/decline, ac­cess points and the discovery of any sensitive plant/animal spe­cies.”

Geiszler said those details will be presented to the commu­nity at a future open house.

It’s too soon to say when a proposed county park might be completed, she said.

“We work every day to balance recreation with preservation, and the goal is to provide the greatest possible benefits to all residents,” Geiszler said.