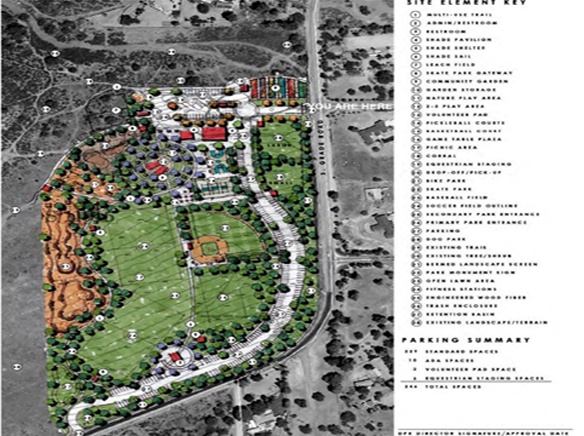 The proposed 25-acre destina­tion park site is located adjacent to Wright’s Field and is currently slated to include a skate park, sports facilities and other ameni­ties.

However some residents say the park is ill-placed on traffic-heavy South Grade Road and does not reflect the rural character of Al­pine.

A group of people who gath­ered in early December under the name Save Wright’s Field have since renamed the group Pre­serve Alpine’s Heritage and want to see the county reconsider plans based on resident feedback at the upcoming meeting.

One group leader, Julie Simper, said the unofficial members are “starting to realize that working with the county is not going to be as collaborative as we hoped” after a meeting in which county representatives said they plan to create more than 270 parking spaces at the rural site.

Simper said it was dishearten­ing to hear county representa­tives cite internal metrics over what Alpine residents said they wanted to see in a local park.

“We want to see a more ap­propriately sized park with less concrete, less invasive materi­als, more aligned with the rural location. Ultimately we’re prag­matists and understand they’re going to do something with this land, but drawing people to over 270 parking spots with no answer on how the park can be accessed without going through Wright’s Field — they do not seem to care about that,” Simper said.

Back Country Land Trust Pro­gram Director Jon Green said the organization, which is unconnect­ed with Preserve Alpine’s Heri­tage, is working with the county and other stakeholders to ensure the new park fits with the char­acter of Wright’s Field and the needs of the community while also minimizing impacts to the trail system and native habitat.”

Two of the most endangered species in San Diego County, the Hermes Copper Butterfly and San Diego Thornmint make their home at Wright’s Field, a 245-acre open-space conserva­tion property owned by Back Country Land Trust and sits ad­jacent to the proposed park site.

County representative Jessica Geiszler said they continue to evaluate the design plan, recon­figuring it as needed to improve flow and reduce user conflicts while also making sure there are adequate buffers between park uses.

Members of Preserve Alpine’s Heritage hope residents attend the meeting, Simper said, “so we can get a better assessment of who is out there” and increase awareness of county plans.

The upcoming meeting will be held through Zoom and the link can be accessed at: sdparks. org/publicmeetings.