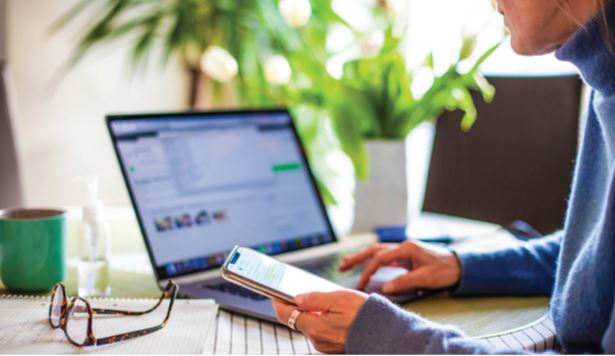 Navy Federal Credit Union Commercial Banking Lead Matt Vean, who happens to be a Space Force spouse, collated information from over 2,000 interviews with military spouses on what they value most in a job.

Career choices and financial literacy often go hand-in-hand, Vean said, and they appear to be linked to what people were taught in high school.

“When I was in high school, I never took an accounting class. More than ever, it is important to learn about economics and in today’s world, we all need to be dual-income households so the more education you can glean, the better,” Vean said.

On the other hand, he said, it can be challenging to question ‘Do I spend $80,000 to earn an M.A.’ if you live in a place where everyone in a related job field has an Master’s degree and above. There is a balance, he said, between earning the same degree as anyone else has and finding a way to “separate ourselves” as job candidates. Often, he advises spouses to seek out companies that offer tuition reimbursement.

“We’re in a whole new environment with this great resignation happening so there are jobs available and there’s tons of companies offering tuition reimbursement,” Vean said. Some of the larger companies, “the likes of Capital One, Google, Amazon” are ripe with remote positions where spouses can grow a career regardless of where they live.

The remote viability of some jobs actually helped the spouse community, Vean said and he has seen first hand that many larger companies are generous with tuition reimbursement.

Many companies have also moved toward partnerships with schools that are “all online” Vean said, offering spouses in a remote position the chance to complete their degree regardless of where they are stationed, or if they move mid-degree.

“And, if you can’t get a full degree, look at all the colleges offering eight or ten week certifications. Maybe you can’t get your full MBA or MPA, but you might be able to get something that can check a box. Certs are huge— they make you a little more competitive on paper,” Vean said.

Spouses also need to grow their own brand as individuals, he said, create a social media presence on LinkedIn with an attractive profile that sells their value as an employee, and connect with others who might be able to help them. Mentorship, he said, resonates with everybody.

“When we moved from Denver to D.C. in 2014, I’d never done a military move and I quickly learned that many people get their job because of somebody else. Now, if someone tells me they’re moving near me, I’d help them in a heartbeat. You can’t just apply to a career webpage because it’s like submitting a resume to a black hole,” Vean said.

A retired soldier, Tom Downs taught him a lesson, he said, on the importance of consistent networking.

“He would talk to veterans and spouses about creating their spider web, people you can rely on to reach out to for help or safely ask what you’re doing right or wrong. It’s about being consistent. You can’t just update your LinkedIn profile, you have to have a goal. Maybe you start by reaching out for two coffee meetings, then ten connections, and so on,” Vean said.

Prior to the pandemic, 13% of military spouses were unemployed and 43% were underemployed, and the pandemic exacerbated hiring challenges.

However, Vean said he believes some of the traits military spouses naturally develop are their biggest asset in a changing post-pandemic world.

“We’re resilient, tenacious, adaptable, flexible, and we have transferable skills— those can get you flexible hours and a higher salary. I keep echoing that all these things play into the positive for military spouses,” Vean said.