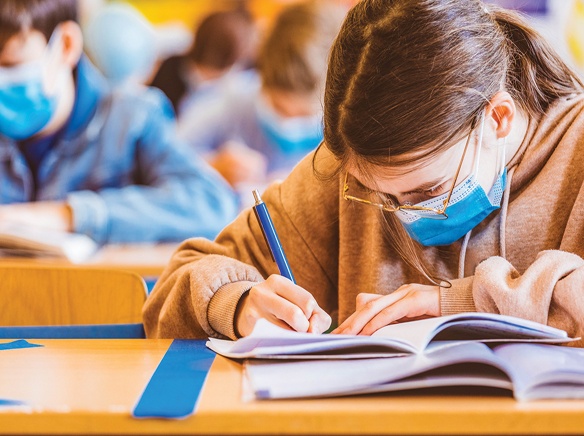 On July 8 the Alpine Union School District board of trustees unanimously approved a plan to reopen schools for the 2020-21 school year with students attending classes four days per week and utilizing distance learning one day each week while facili­ties are sanitized.

They also approved a distance learning option, as well as home school and independent study options for parents who prefer to keep their children off campus.

Superintendent Rich Newman said the plans were formulated after gathering what he called a “pulse check” from parents and staff through questionnaires.

Just 4 percent of parents expressed an interest in distance learning, while staff responses came in higher at 27 percent.

The superintendent also said every parent he personally spoke with said they wanted to see their children back in school.

“Connection is critical… The face-to-face recommendation we’re bringing forth is for students to return to school four days a week with one day to work from home while staff has an op­portunity to train and, most importantly, to provide time for a deep cleaning of classrooms. I know not all districts are offering that but if we’re returning then I want to do this with fidelity,” Newman said.

During his superintendent’s report, Newman said the district has received $20,000 from the state of California and $120,000 of federal funding, much of which has already been spent on preparing for a safe return to school.

“We’ve broken a quarter of a million dollars already on dis­infectants, pallets of hand sani­tizer, thermometers, specialized applications where our staff can come on campus and determine if they have a temp, personal protective equipment,” Newman said.

The superintendent also said teachers will be asked to iden­tify the most necessary pieces of furniture in classrooms, with superfluous pieces moved to storage in an effort to cut down on common surface areas.

In addition to campus learn­ing, the school board approved blended and distance learning options.

School board President Travis Lyon said he’s spent a great deal of time considering learning options and strongly believes it is important for kids to be in school, but recognizes some par­ents want an alternative.

“Not everyone is going to put their kids back in school; but offering the two options and a distance learning plan — I feel that if some people choose that option, we did such an excellent job that it’s important for us to maintain that,” Lyon said.

Board member Al Guerra Guerra said other districts are locking students into the learn­ing option they choose at regis­tration for a set period of time in order to maintain classroom ra­tios. Newman agreed with that reasoning but did not finalize a commitment term.

“Let me play out a scenario: hypothetically, we start school and a cure comes, then all those parents want to bring their child back and all those districts have locked in students… On the flip side, something happens and schools are suddenly closed. We have to be adaptive but smart about it. We haven’t finalized that component but I’m leaning toward a semester or trimester,” Newman said.

Following the decision to re­open campuses as well as offer distance learning, the board discussed ways to rein in busing costs for distant students.

The superintendent leaned heavily on the possibility of eliminating busing for all stu­dents except special education students who are legally enti­tled to school transportation for the remainder of the calendar year, followed by a reassessment of the situation before students return from planned winter break. Doing so would alleviate the burden of incurring extra costs for additional buses to ad­here to social distancing guide­lines.

“I want to put every bit of resources into the classroom,” Newman said.

Ultimately, Lyon proposed to postpone the topic of busing for a later meeting to be announced sometime this week.

The next regular open school board meeting is at 6:15 on Aug. 12 and can be accessed online through the district website at alpineschools.net. School starts on Aug. 19.