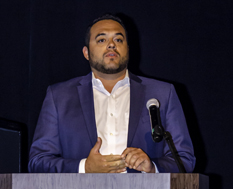 Campaign Focuses on Casino’s Close Ties to San Diego Community
August 3, 2015 – (San Diego, CA) – Sycuan Casino has proudly launched a new branding campaign and rally cry for the property in “Play. Win. Together.” The campaign was launched with a VIP Media event this evening in the state of the art “Live & Up Close” Theater.

Campaign Focuses on Casino’s Close Ties to San Diego Community
August 3, 2015 – (San Diego, CA) – Sycuan Casino has proudly launched a new branding campaign and rally cry for the property in “Play. Win. Together.” The campaign was launched with a VIP Media event this evening in the state of the art “Live & Up Close” Theater.
“’Play. Win. Together.’” as a brand means so much more to us than standard casino messaging. It is about our relationships here with our customers, the community, and San Diego as a whole,” said John Dinius, interim general manager. “We are going the extra mile to walk the walk here. From our newly re-launched Club Sycuan program that is the undisputed best in the market, to our huge new non-smoking area, we have listened to San Diego and retooled the environment for our market.”
The campaign itself is a slice of life in San Diego, featuring the close connection Sycuan Casino has to the community and, of course, the nonstop action that the gaming property offers. Sycuan assembled a top-notch production team featuring Director Jeff Apps, known for several national campaigns and music videos, along with Oscar-winning cinematographer Russell Carpenter (1998, Best Cinematography, “Titanic”). The TV and print pieces feature not only actual Sycuan employees and charities, but a few cameos from San Diego icons like Padres Playoff hero Steve Garvey, NBA Hall of Famer Bill Walton, Charger Legend Billy Ray Smith, and Professional Wrestler Rey Mysterio Jr. The song in the TV spot, “One Minute More”, was provided by the high-energy duo, Capital Cities.
“Sycuan Casino is such a sincere brand, so authenticity and realism were important to us. From community efforts, to partnerships, to gaming, this spot is a true cross section of a day in the life of Sycuan and its employees,” said Dan Morales, Marketing Director. “Throughout the campaign, these are real Sycuan Casino employees. They are veterans. They are volunteers. They are amazing people to interact with on the casino floor. It is so real and we are so proud of that.”
Besides the premiering TV spot. A complementary high profile radio, print, outdoor and media campaign have been rolled out as well.
About Sycuan Casino
Sycuan Casino began as a humble Bingo Palace back in 1983. Now, 30 years later it has become a community landmark. Undergoing a massive renovation in 2011,
Sycuan now features 2,000 exciting reel and video slot machines, more than 40 gaming tables, poker, bingo, off-track betting, and a variety of restaurants to choose from.
Non-smokers will also enjoy over 750 slots and table games in the comfort of San Diego’s first and largest fully-enclosed non-smoking room – complete with its own separate entrance and Paipa’s Surf & Turf buffet.
The GameDay Sports Bar & Grill has 39 wide-screen TVs, including 5 90-inch TVs, bar-top slot machines, a stadium sized menu, over 30 beers on tap, and an extensive collection of sports memorabilia.
Sycuan’s intimate 457-seat entertainment venue, Sycuan Live & Up Close, features national musical acts and comedians year-round. Open 24 hours daily.   For additional information visit www.Sycuan.com