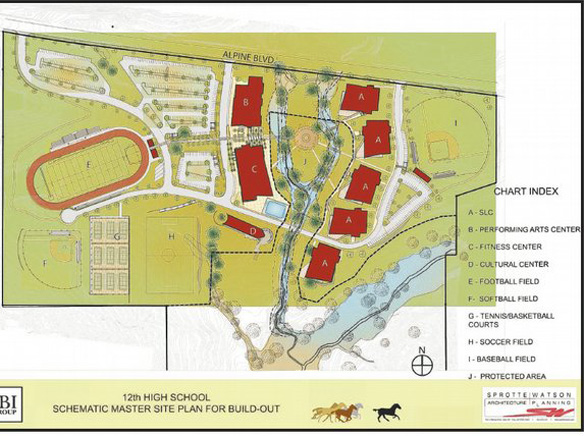 The Alpine High School Citizen’s Committee held a meeting on Tuesday, July 24th, concerning the matter of the contentious Alpine High School. The group holds the goal of galvanizing unification for the Alpine Union School District. Committee member Sal Casamassima explained, “When you get unification, you then have a school district that’s a unified school district, that goes from kindergarten through the twelfth grade.”


The Alpine High School Citizen’s Committee held a meeting on Tuesday, July 24th, concerning the matter of the contentious Alpine High School. The group holds the goal of galvanizing unification for the Alpine Union School District. Committee member Sal Casamassima explained, “When you get unification, you then have a school district that’s a unified school district, that goes from kindergarten through the twelfth grade.”
The current Alpine school system starts at kindergarten and continues only through the eighth grade. If unification can be achieved, the district will build the long awaited Alpine High with the funds promised in school funding bonds H & U. Casamassima also said, “What was originally supposed to take place was Grossmont [Union High School District], with the bond money that the whole area passed, all of east county, was to build this high school.” He further explained, “Since they have now basically refused to build a high school, the only way we can get those assets is through unification.”

Regarding what challenges the committee faces from the GUHSD governing board on the road to their goal, one member said, “I think Jim Kelly and his ilk wouldn’t care if they spent 10 million dollars on outside council fees to fight us, just for spite.” At this first committee meeting after a few months of inaction, strategies for getting petitions for unification circulated and signed were discussed.

Possible locations to look out for petition tables where you can sign include the Albertsons, Starbucks, and Rite Aid on Alpine Boulevard, and the CVS Pharmacy on Tavern Road. Petitions might also be found at local upcoming AYSO sports events. Signatures must be from registered voters within the boundaries of the Alpine School District. One member said, “2014 is when we want to be on the ballot to get this thing resolved. So the quicker we get the petitions going, the quicker we can meet that deadline.”

The committee members hold high hopes that all of Alpine’s voters will be in favor of unification, and the construction of the Alpine High School. The meeting coordinator Al Haven, said, “Every business in town benefits from a high school up here. We have a thousand kids leaving town every day, and lots of them not being able to get back unless their parent goes and picks them up. Money goes down the hill, for the shops and everything else.” The citizens committee feels that this high school in Alpine would have a beneficial effect on Alpine’s economy, school enrollment, and the real estate market.

The committee is also reaching out through social networking sites like Facebook and Twitter, to boost awareness and support of their cause. About the committee’s new website, member Mark Price said, “It’s a good way to get it up on the radar screen for the search engines, but it’s also a great way to get signatures for petitions.” All information regarding meetings, status of the unification process, the history of the struggle for the Alpine High School, and links to Facebook and Twitter can be found on the newly created committee website, “alpinehighschool.net.” Also discussed in the meeting was the matter of possibly meeting with a Grossmont Union High School District governing board member to discuss the unification efforts of the Alpine High School Citizens Committee. In the words of Mark Price, the goal of this proposed meeting with the GUHSD board member would be to “present the idea of them supporting us in a unification effort.” He then added, “I don’t want to get hopes up, because I don’t expect anything to come of it, however I think we’re doing the right thing. We’re being up front, we’re letting them know what’s going on, we’re not trying to hide anything in the dark.” Another goal that the committee wishes to pursue is convincing Alpine’s teachers of the benefits of the Alpine High School, and garnering their support on the issue.

The Alpine High School Citizens Committee website states, “Unfortunately even though Grossmont and Alpine school districts are completely separate entities, voter distrust is taking a toll on the local school district.” Also on the website, committee member Al Haven states, “Teachers are at the center of what makes Alpine great. Teachers deserve job security, and necessary resources to teach the next generation of student. Alpine didn’t create this problem, but we’re going to work to fix this problem.”