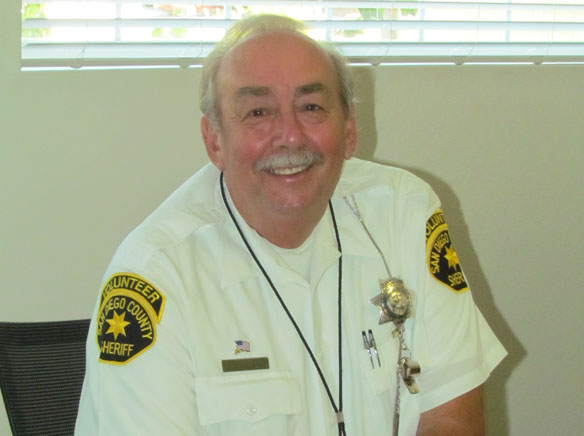 San Diego County Sheriff Senior Volunteer Patrol members typically say they handle a couple of tasks: direct traffic and check on anyone who might need someone to look in on them every now and again. However, that doesn’t begin to cover what the group does and it is only by sitting in on a volunteer patrol group meeting with the Sheriff that volunteers start to reveal how they connect law enforcement and the community.

Volunteer Bob Marquart, leading a regular morning meeting, described how his crew scrambled to get to a recent plane crash in Santee that destroyed two homes and killed both the pilot and a United Postal Service driver at work in the residential neighborhood.

“We’re really there to assist the deputies with things like road closures. It’s non confrontational, people don’t argue with us and it allows the deputies to do what they need to do at the site,” Marquart said.

Recently, volunteer Gary Duhamel, on a call along with Stephen Boulter and Jim Cate, was asked to assist with a fire prevention demonstration in The Meadows housing community in Alpine. That demonstration mirrored what would happen in the event of a fire: police are often called to assist fire officials but serve a different role on scene.

“Being asked to help is normal, but you’re not there putting out fires, you’re evacuating people,” Alpine Sheriff Captain Mike Rand said.

In this case, having members from the senior volunteer patrol unit on hand revealed how helpless the elderly residential community might be if a fire broke out. They were advised to uncoil and move a large fire hose, connect it to a solitary standing water source, and shift around as needed to suppress a fire until help arrived. In reality, senior volunteer patrol members, familiar with several of the residents from recent wellness checks, knew of at least one person who would be helpless if a fire broke out.

On that same call, residents were advised to turn off their gas meter. Patrol volunteers at the event realized that many of the older residents were not aware they should wait for San Diego Gas and Electric to turn the gas back on or risk a dangerous situation with consistently fed pilot lights inside their homes.

“It really showed, from our perspective, how the biggest thing is we’ve got to get them out of there and how they’re really at risk,” Duhamel said and the experience likely changed how their housing community will rethink emergency situations.

The group is about to have its first run at directing event traffic post-pandemic with the upcoming Alpine Holiday parade. In past years, Pine Valley and Santee senior volunteer patrol units would come to assist, a few volunteers remembered, chatter breaking out as they started to plan for the event like the pandemic never happened.

The tight-knit group also keeps tabs on each other, Marquart said and volunteers often remain with the unit for years.

Anyone interested in volunteering with the senior volunteer program can call (619) 659- 2609 or visit sdsheriff.gov for more information.