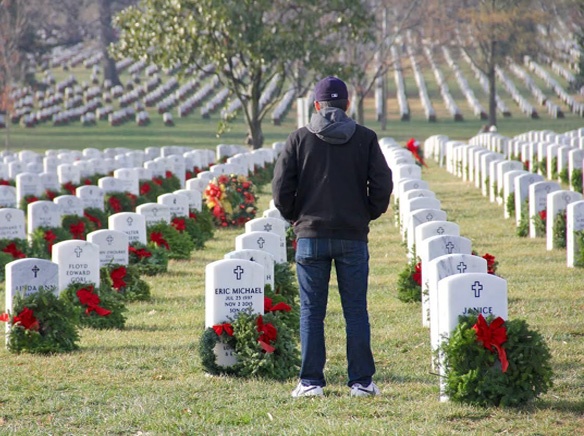 Wreaths Across America volunteers will be laying wreaths across veterans’ graves at nine different cemeteries across the county on Dec. 17 as they say their name aloud in remembrance, just as volunteers have done at military graves since Worcester Wreath Company donated extra wreaths to Arlington national cemetery in 1992.

However, volunteer Brenda Kaesler said the nonprofit organization is running short on donations and this marks the first year they are considering whose grave might go bare.

“Right now in San Diego, we only have 24% of what we need to cover our headstones,” Kaesler said on Nov. 9.

Although the more important component of the annual ritual is to say each name aloud, “the wreath is a visual symbol they are remembered,” she said and she hopes more donations will come in.

Kaesler, who laid her son to rest at Miramar national cemetery in 2015, said she and other WAA volunteers ascribe to the idea that people die twice: once when they take their final breath and once when their name is said for the last time.

“You know, some of the younger veterans don’t even understand they’re part of history. They really think it is just a job. My son did not enjoy when people said ‘thank you for your service’ and would tell me ‘Mom, that’s like them coming up to you and saying ‘thank you for being my dental hygienist’. They won’t see the difference they made until they’re much older and can look back on history,” Kaesler said.

That point is significant to note as a WAA volunteer, she said because she wants younger veterans still serving on active duty to understand their grave will be remembered and their name will be spoken aloud as well.

“We want to remember every veteran and be respectful of customs and beliefs. I believe we can always find a respectful way to remember veterans,” Kaesler said, regardless of religion.

The circular wreath is associated with both pagan holidays as well as the Christian faith.

“A few years ago, I didn’t like that we had a sea of wreaths with others that had nothing so I called a couple of Rabbis and asked what we could do. They recommended placing a rock atop each headstone so there is a visual representation of Jewish veterans being remembered,” Kaesler said.

KRC rock donates river stones each year now, she said. Just as with the wreath adorned gravesites, each veteran’s name is said aloud and they are thanked for their service.

“To adorn a Muslim gravesite is a desecration but we can stop, say their name aloud, thank them for their service and sacrifice,” Kaesler said. The mission, she said, is to remember fallen veterans but also to teach younger generations to value freedom, to be aware that someone sacrificed for them.