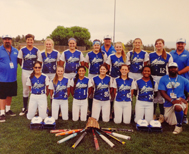 By Sal Cassamassima
For The Alpine Sun

By Sal Cassamassima
For The Alpine Sun
The Alpine 14U All Star softball team finished in 5th place (out of 32 teams) at the ASA Western Nationals fast pitch softball tournament played this past week in Prescott, AZ.  In doing so the Alpine 14U team became the only team in the western US to finish in the top 5 for the last two years.  (They finished 2nd in 2014).  Alpine 14U was also one of just 3 teams at Nationals from San Diego County and the only team from East County.  This accomplishment came on the heels of Alpine winning the South SD District championship, coming in 4th at the SoCal State Championship, and winning 4 out of 5 all star tournaments.  (The Alpine 12U All Star team also made it the 12U Nationals in Medford, Oregon and finished a respectable 13th in that tourney, making Alpine one of a handful of leagues to send two teams to Nationals!)
Despite battling injuries to several girls and monsoon rainstorms in Prescott, the Alpine 14U team moved along in the winner’s bracket and came within an inch of making it to the final 3.  They lost to a very strong team from Huntington Beach that was the ultimate tournament champion.  However, there were many highlights and strong performances.  Pitchers Karli Ramsey and Emma Casamassima each won two games for Alpine, and Ramsey, along with Kayla Hopper, launched tape measure home runs.  There were also spectacular fielding plays and key hits that were the equal of anything you’ll see at a major league ball game.
The girls on the team also worked hard at fund raising and collected over $8000 in donations to support the team.  Special thanks to Albertson’s and Baron’s for hosting our bake sales; Applebee’s of El Cajon for hosting our breakfast fundraiser, and to our many sponsors and donors.  Thanks also to our team manager, Buddy Wilkerson, and coaches Mike Rose, Roland Howard, Doug Hopper and Dave Whipple who devoted countless hours to prepare the girls for the three month long all star season.  A final thanks to the parents for their patience and endless support of their girls and the Alpine team.
Our 13 girls (Alexa, Amanda, Briana, Danielle, Delaney, Emma, Erica, Jada, Janina, Kayla, Karli, Lindsey, and Zoe) not only represented their team but all of Alpine.  We lost count of the number of people at all of our tournaments who came up to us and asked – “Where is Alpine?”  Their great play and sportsmanship made them ambassadors for our wonderful community.  If you see any of them around town give them a fist bump and tell them how proud you are of their team and how well they represented Alpine