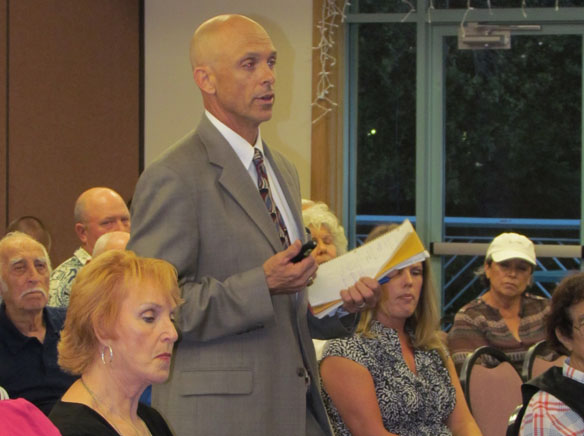 Alpine wants to stay rural, eccentric and eclectic!   Residents showed an amazing interest in the July Alpine Community Planning group as over 160 filed into the Alpine Community Center in a show of protest.  On the agenda, the planned Victoria Village, with a proposed tenant, 7/11, was seeking the addition of a type 20 liquor license.  The ACPG must weigh in on these licensing matters before they go before the Alcohol Beverage Control (ABC) of the County of San Diego.

Alpine wants to stay rural, eccentric and eclectic!   Residents showed an amazing interest in the July Alpine Community Planning group as over 160 filed into the Alpine Community Center in a show of protest.  On the agenda, the planned Victoria Village, with a proposed tenant, 7/11, was seeking the addition of a type 20 liquor license.  The ACPG must weigh in on these licensing matters before they go before the Alcohol Beverage Control (ABC) of the County of San Diego.

The ACPG is only an advisory board, they do not hold the final say in any of the Department of Land Management Use issues. They only weigh in after hearing comment from the community, and then they report back to the County. The meeting began normally, at 6:00 on Thursday, June 26, at the Community Center, led by Jim Easterling, who holds the Assistant Chairman’s position, as Greg Fox was absent.

In the Open Discussion portion of the meeting, Scott Tuchman, previous ACPG group member and communications Chair approached the board, warning them that the ACPG Website was in danger of expiring, and once this happens, the board would be without their website, and web email.  Lou Russo has taken over as the communications chair, and it was requested that Russo take charge of this issue.

During the ACPG Group Business, Seat #14 was open, and had two petitioners who were willing to fill the position.  Charles Jerney, and Nicole McDonough put forth their positions, and were supported by Alpine residents for this position.  When the vote was cast, McDonough won the nomination by one vote and Jerney was invited to sign up for the ACPG seats in the upcoming election as there would be eight vacancies to fill.
Jim Archer presented new plans for parks in Alpine.  He presented the idea of making the Alpine Community Center Park Alpine’s priority #1, and also a parcel of land that is on Arnold way for another park project.  He did not give a specific address, of the land, giving the ACPG members the parcel number instead.  The ACPG agreed to make the Alpine Community Center priority #1 and further investigate the Arnold Property.
When the time came for the issue of the night to be discussed, Easterling cautioned the large group of residents saying, “The discussion is clearly not about a 7/11 going in,” he continued by telling the crowd that the only thing that was before the ACPG is the Type 20 liquor license that allows only beer and wine.  He told the group specifically if anyone approached the board with anything about a 7/11 going in, they would be asked to take a seat.  He also cautioned the attendees saying that no one should repeat information that has been brought before the board.

William Perno from the Institute for Public Strategies made his presentation to the ACPG that he had previously made to Alpine residents on July 17th at the Alpine Woman’s Club.  This PowerPoint presentation was a clear concise briefing on how the ABC regulates liquor licensing and what the impact of liquor licensing is, in the community of Alpine.  The twenty minute presentation covered what the ABC looks at when granting a license, what the saturation is in the proposed areas, and what the impact is on the county when liquor licenses are granted in an area. Perno’s position was neither for nor against the granting of the license, his purpose was only to educate the board and the citizens about the licensing and the saturation of licenses already in the census area.

Mike Milligan asked whether or not the Sheriff’s Department has weighed in on this subject.  Perno said he did not have those documents, but William Adams said that they had okay’d the project.

William Adams, from William, More and Adams LLC, rebutted Perno’s presentation with a lesser PowerPoint presentation. He opened his comments by saying “I hope that we will be a positive addition to the community.” He argued that 7/11 is not a hard liquor sales store.  Alcohol typically makes up less than 10% of 7/11’s  overall sales, while foods and sundries make up most of the purchases made.  He said that 7/11 has such vigorous training requirement on Alcohol sales that the ABC has modeled some of their requirements after 7/11.  In closing, Adams said that 7/11 already has $55,000 in escrow for a Type 21 license that is already in the census for the Alpine area, however he said, “We’d rather get the Type 20 license.”

Kippy Thomas, ACPG member, questioned Adams about his declarations that 7/11 is strict regarding their ‘no loitering’ and ‘no vandalism’ policies.  Thomas said, “I have witnessed every one of these things.” Thomas’ experience came from building projects with the Circle K company, and the constant repair work that had been done after fresh paint was applied and tagging immediately happened.  Williams answered, “That’s Circle K. We’re not Circle K."

Comments from the public were heard beginning with Tom Dyke who reiterated that Alpine did not need anymore liquor licenses in Alpine.  He pointed out the many fatalities that have occurred in Alpine due to alcohol to emphasize his case.  He said, “It ain’t about 7/11, it’s about alcohol and it’s about the damage it does!” Applause from the crowd broke out.

Carol Morrison from the Design and Review Board and the Alpine Historical Society made her case the ACPG.  She presented a petition that had been signed by 429 people who did not support the addition of  another liquor license in Alpine.  She touched upon the many churches, preschools, teen programs and community programs that were in the area of the proposed 7/11 and requested that the liquor license be denied.
Peggy Barnum from the Alpine Community Church presented her case saying that the patios that belonged to the surrounding churches, and Woman’s Club would become comfortable places for people to ‘hang out’ or sleep as the convenience store would open up loitering possibilities.  Other questions were raised such as why do we in Alpine need to supply more liquor to those who fly through town on their way to the desert or to the river?  When is enough, enough?

Flora Thompson said, “We have to set the example for our youth. . .I would have to say no to any more liquor licenses. . .”
Tom Myers said, “The town core is a community’s heart and soul and if we don’t protect that we lose something very precious.”  Then Myers did something that showed a very visual statement, he asked everyone in the room who was there to oppose the liquor license to stand.  90% of the people sitting in the chairs stood in solidarity. 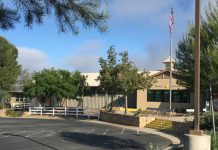 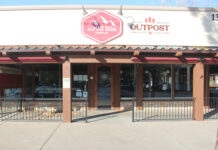 Change is brewing in Alpine