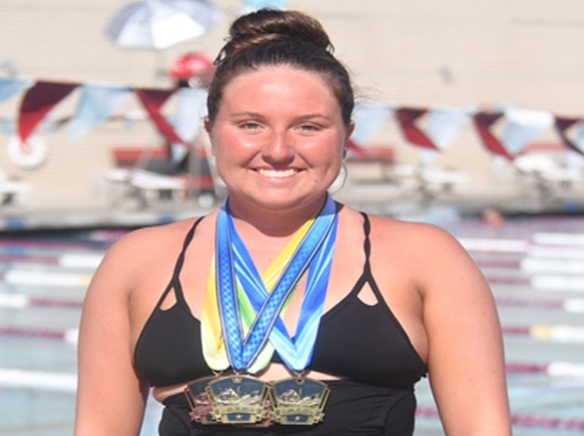 The Pacific Coast Athletic Conference held its first swim and dive championship meet since 2019 last weekend, April 21-23, at Southwestern College. It was a triumphant return to the pool for many swimmers who had their 2020 season cut short by the Coronavirus shutdown.

In all, two full seasons were lost to the COVID-19 pandemic.

“It was exciting to get back into the pool, back into swimming,” Grossmont College men’s head coach Anhton Tran said. “But it’s been rough coming back from a long time off.”

Despite lower numbers, it was a competitive meet thanks to the rules that govern community college swimming. At the community college level, swimmers can compete in as many as seven events over the course of a championship meet — three individual events and four relays.

Teams were thus able to stretch their talent across the board to pile up points.

That definitely worked in the favor of the Grossmont College men. Palomar College recorded first-place finishes in 11 of the 20 men’s events to Grossmont’s six event championships, but the Griffins prevailed by numbers.

“A lot of depth was the difference,” said Tran, who earned honors as the PCAC Men’s Coach of the Year. “We had multiple swimmers in the championship finals.”

The Lady Griffins managed to squeeze in two event victories in a meet otherwise dominated by Mesa College with 14 firstplace finishes, including diving. Dickman was involved in both Grossmont wins.

“Swimming at the community college level is very difficult,” said Dickman, who placed runner- up at the Grossmont Hills League finals in the 500 freestyle and 100 backstroke and was part of two league championships with the Lady Eagles.

The top five place-finishers in each race received medals.

The 1,650 freestyle race is the marathon event in the conference finals consisting of 66 laps.