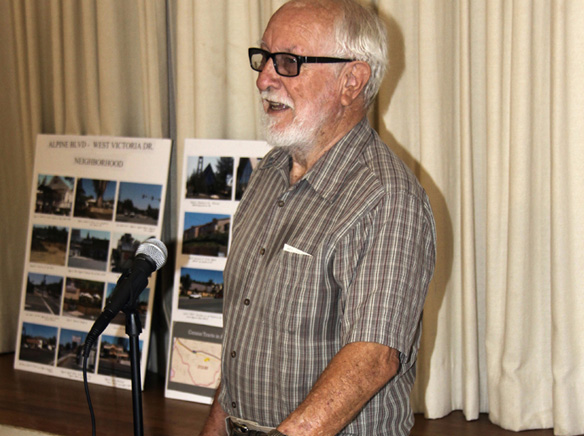 San Diego State University Leland Feltzer spoke at the Alpine Woman’s Club about Alpine, and the history that was built by each group of immigrants. Feltzer has written a guide for San Diego County, San Diego County Place Names A to Z. This is described as the definitive place names guide to San Diego County. He also wrote, ‘A Year in The Cuyamacas’, a collection of short essays about nature and the men who lived in the mountain range 50 miles east of the city of San Diego. Another book credited to Feltzer is ‘The Cuyamacas’ which is an informal history of San Diego’s mountain district.

Feltzer spoke on August 19, at the historic Alpine Woman’s Club at 1:00 p.m. He was open to different discussions about the history of our area, along with the unusual monikers that label many our towns, summits, valleys, and roads. For instance, Japatul is a native American Kumeyaay term for ‘water basket’ or place of water, however in Feltzer’s book, it probably preserves the name of the indian village Japatai which was still in existence in the early 1800’s. Peutz Valley was named after Nikolas Peutz, a German immigrant who capitalized on the coast live oak, by making charcoal out of the wood, for smoking hams and other meats in San Diego. Oakzanita is the combination of Oak and Manzanita to very hardy trees that grow in the area. Muth Valley was named after A. M. Muth a beekeeper in the El Cajon and Alpine Area.