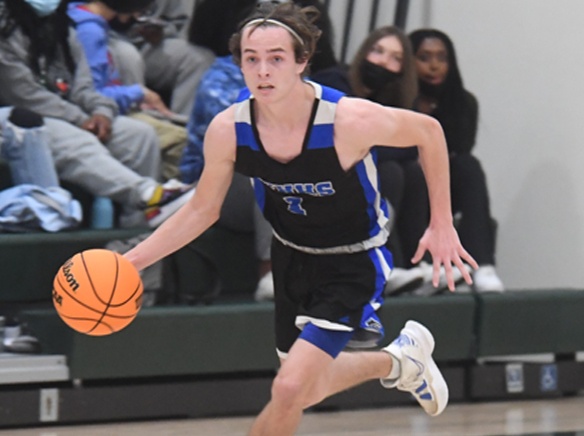 The San Diego Section boys and girls basketball playoffs are scheduled to tip off Feb. 15 in a total of six divisions. That doesn’t leave much time remaining for regular season play in a season in which COVID-19 protocols have postponed many games.

The playoffs are beckoning, however.

Playoff pairings will be announced on Feb. 12. Any playin games will take place before the start of elimination bracket play.

The section has already announced championship venues for this year’s finals.

Now that the rather long list of guideless have been set, it’s time for teams to qualify for postseason play.

That may be easier said than done.

Helix Charter High School boys coach Jason Cavazos said his team has already had two games postponed because of COVID issues and cannot afford many more games to be stricken from the schedule in the battle for this year’s Grossmont Hills League championship.

“We have our backs up against the wall,” Cavazos said in regard to scheduling.

Helix isn’t the only team facing make-up games in a dwindling regular season schedule. Almost everyone has been affected in either losing league or non-league contests.

A number of East County teams do appear to be in the mix to earn playoff berths, including top-half seeds.

Helix (8-10) entered the week ranked 19th among boys Open Division/Division I teams, meaning the Scotties would likely qualify as the No. 11 team in Division I if the playoffs started today.

Mountain Empire is battling for the Pioneer League title with an early 4-league record.

Mount Miguel (12-6) looks to have a good chance to qualify for the Open Division girls playoffs with the current No. 6 Division I ranking while Helix (7-5) was ranked ninth among Division II girls teams entering the week.

Steele Canyon was the early leader in the Grossmont Valley league girls standings with a 3-0 league record, followed by Granite Hills at 2-1.

Mount Miguel led the Grossmont Hills League girls standings with an early 2-0 record, followed by Grossmont and Helix both with 1-1 records.

The Eagles tipped off league play with a 78-50 win at Mount Miguel on Jan. 7. Tre Edmond poured in 34 points in that game while Derek Edmond dropped in 20 points. The Eagles sank 10 treys in the game, including four each by Derek Edmond and Tre Edmond.

Junior Lawond Zangana keyed the visitors with 14 rebounds while Derek Edmond was credited with 10 rebounds. As a team, the Eagles out-rebounded the Matadors 43-18.