Brody Richardson, 15, will be an adult and hopefully a high school grad­uate by the time he finishes over three years of treatment for Acute Lympho­blastic Leukemia.

Last year, he was a newbie fresh­man on campus at Granite Hills High school, an award-winning kid who came from the engineering program at Joan MacQueen Middle school that loved spending time outdoors biking, tinkering and working on his favorite hobby of rebuilding and flipping old cars and trucks.

This year, he has spent the major­ity of his time in bed, resting between medical treatments and keeping up with school through distance learning while isolated from anyone who could get him sick.

Initially, he ignored recurring back pains as people were told to stay home in March of last year and most medical professionals restricted in-person ap­pointments to emergency cases only; it wasn’t until July when he was too tired for a regular bike ride that something seemed truly wrong.

Macrorie said she began the 45-min­ute drive from their Pine Valley home to their assigned Kaiser hospital in San Diego on July 22 around 2 a.m. but made it as far as La Mesa with Brody in pain before detouring to the nearest emergency room at Grossmont hospi­tal for a middle-of-the-night visit that included bloodwork and testing.

“A doctor came in and told us he has Leukemia. Just like that,” Macro­rie said.

Since then, a GoFundMe account was established to help with medical expenses.

“Initially, we were lucky to get a lot of donations. His dad and I split it to give Brody his own bedroom at the two houses so he has a more sterile environment. Recently, we haven’t had as much but we just got $100 and that helps with driving to treatment and paying for parking,” Macrorie said.

At this point, Brody is basically repeating the same process he went through with the first round of medica­tion during the initial Induction phase of treatment. His boyish hair has grown back since it fell out with the first round of chemotherapy but will likely fall out again sever­al times throughout the next few years before growing in for good as an adult. He has lost and gained weight that he will lose again.

Brody said he looks around the younger kids at the clinic he goes to three times a week during treat­ment phases and thinks “how glad I am that I’m going through this” and not one of his younger siblings.

“I wish people knew how hard it is. The only good part is that I can kind of take one for the team, maybe I have it but someone I care about doesn’t,” Brody said.

In a bit of irony, some of the CO­VID restrictions have served him well.

“Most everyone is wearing a mask and distanced so I’m not missing out on much. My friends don’t throw that many parties now,” Brody said.

Macrorie said most people take the time to protect her son but there are people who purposely refuse to mask up and it can be frustrating.

“Especially here in our area, there are some who refuse to dis­tance and, if they really knew what they were doing, helping people with a compromised immune sys­tem, I think they might choose dif­ferently,” Macrorie said.

The pandemic has reduced their opportunities for public fundrais­ers but that hasn’t stopped Brody’s mother from coordinating events that draw awareness to her son’s ongoing fight with Leukemia so he potentially has resources waiting when COVID-19 restrictions are lifted.

“We are looking to do another rummage sale at Pine Valley Com­munity Church, we would like to do one in Alpine but COVID makes it different,” Macrorie said.

Potential blood donors can visit www.sandiegobloodbank.org/do­nate or call: (619) 400-8251 to sign up for an appointment with code BR20.

Additionally, anyone wishing to contribute financially can do so at www.gofundme.com for ‘Brody Richardson’s road to recovery’. 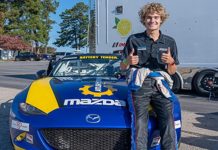