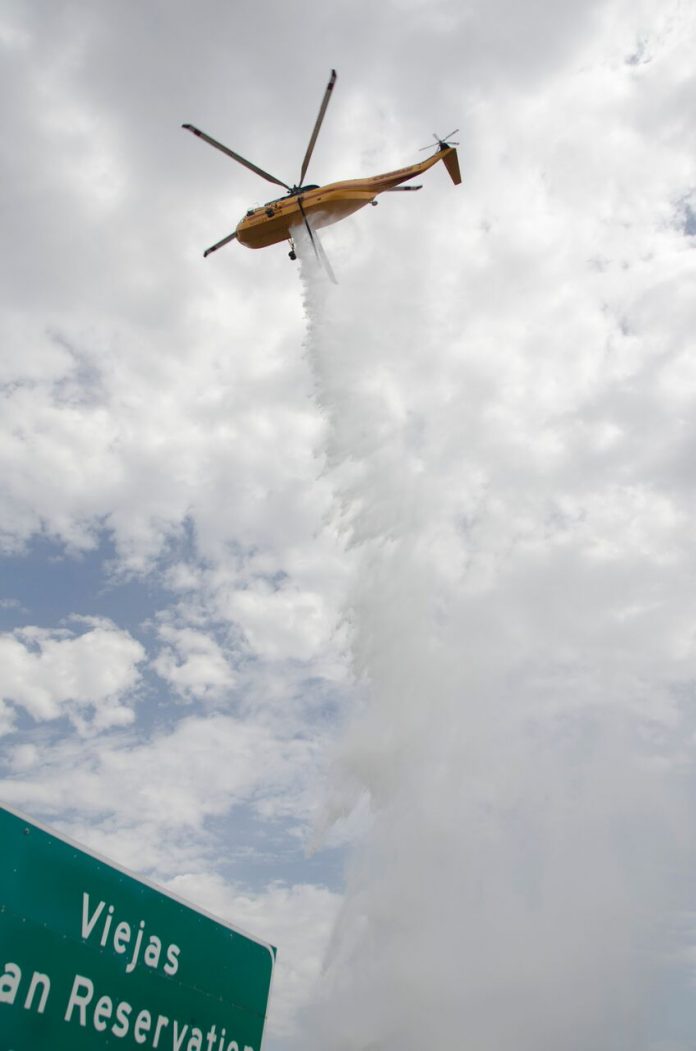 The supervisors’ 5-0 vote Jan. 25 approved the report on the feasibility of additional Heli- Hydrants. Several locations were identified, and additional planning and outreach were also addressed. “I certainly appreciate this work and look forward to continued movement on this topic,” said Board of Supervisors chair Nathan Fletcher.

“I’m very excited to move forward and launch additional Heli-Hydrants throughout San Diego County, particularly in the unincorporated area. Anything we can do to aid in more frequent water drops on wildfires in the back country will actually net more successful outcomes. The goal is always to reduce the forward rate of spread of fires to our more populated areas and to protect homes and businesses of all residents in San Diego County,” said Supervisor Jim Desmond.

The first Heli-Hydrant in San Diego County was installed last year at the Rainbow Municipal Water District’s Pala Mesa site. Whaling Fire Line Equipment, which is based in Santa Clarita, has created and patented the Heli-Hydrant system which allows a pilot or other aircraft crew member to activate a snorkel site remotely. The pilot signals the Heli-Hydrant upon the aircraft’s approach, and a tank 12 feet in diameter and five feet deep can be filled in 120 seconds. The actual fill time depends on the gallons per minute and pounds per square inch delivery of the water source. A float valve which is part of the Heli- Hydrant is secured to keep the tank topped off. Each Heli-Hydrant has drain valves controlled by a radio signal from the aircraft. Redundant power sources such as rechargeable solar batteries, a solar-powered recharging system, and a manual switch ensure that loss of electrical power to the Heli-Hydrant has a minimal effect on its operational ability.

“Fire prevention and response have got to be part of our collective agenda,” Fletcher said. “We remain at risk, and I think Heli-Hydrants can provide another tool for our firefighters during wildfires.”

The county’s goal is to deliver a water drop every five minutes in the event of a wildfire. A water-dropping helicopter travels approximately three miles per minute while in the air, and refilling tanks while hovering over a water source takes approximately one minute. The San Diego County Fire Protection District identified known water sources and utilized a radius of five miles, which would meet the five-minute goal. The county fire department is now working to identify the areas of greatest need beyond the five-mile radius to determine the feasibility of additional Heli- Hydrants in the county. Several locations have been identified, and the feasibility of placing a Heli-Hydrant at each of those locations is being considered.

The estimated cost of each Heli-Hydrant is more than $150,000. The cost will vary by location due to factors such as equipment, installation, maintenance, and connections to a water source.