Though California District 41 Little League was shut out of advancing beyond the section level this year, district administrator Kim Mowrey sees positive growth for the future. The return of all divisions within the parent Little League International organization has certainly created a big boost in enthusiasm. “When baseball is back, it’s big,” she said. “We are higher in numbers. Last year we had 100 fall ball teams. It was crazy. Some of them had four times the numbers they had before.” The East County district is still pushing to get teams beyond the California Section 7 level in all-star tournament play. The last time a District 41 all-star team advanced in the 12U tournament was in 2007 when Alpine Little League advanced. Rancho San Diego’s 10U team advanced in 2012 and its 11U team advanced in 2010. Jamul Intermediate’s allstars advanced in 2013. The last time a Junior Division all-star team advanced was in 2006. The long wait continues after District 41 advanced four teams to section championship games this year but all four finished as runners-up to teams from California District 42. Lakeside National Little League qualified its 10U and 12U all-star teams while Rancho de Oro Little League qualified its 11U all-star team. Singing Hills Little League’s Intermediate all-stars also qualified. The 10U final was played at Fletcher Hills Little League on July 18 while the 11U and 12U championship games were played July 21 at Spring Valley Little League. The Junior and Intermediate divisions also held their finals at Spring Valley Little League. Each section bracket included champions from District 41, District 42, District 66 and District 22 (Imperial Valley). 10U All-stars Lakeside National slipped past Rancho de Oro, 3-2, to win the district banner before advancing to the section tournament. Lakeside National defeated District 66 champion Las Palmas Little League, 13-1, in its opening game on July 16 while District 42 champion Chula Vista American Little League shut out Yuma (District 22) by a score of 18-0 to hook up in the winners bracket final on July 17. Chula Vista American won its first meeting with Lakeside American, 5-3, to advance to the championship game. Lakeside American eliminated Las Palmas in the losers bracket final, 18-2, to draw a rematch with Chula Vista American. CVA scratched out a run in the first inning and made it stand up with the pitching combo of Manny Dorado and Sonny Garcia in the championship game. Tanner Evans started on the mound for Lakeside National in the championship game and remained on the hill until departing in the top of the sixth inning. Javier Rios, who tripled in Dorado in the first inning, greeted new pitcher Easton Lyon with a triple but was later thrown out at the plate to keep Lakeside National within one run on the scoreboard. The bottom of the sixth inning opened with opportunity for the District 41 champions after the lead-off batter reached base on a fielding error. A one-out base hit placed runners on first and second bases. But Garcia, entering the frame in relief, struck out the next batter for the second out. The game ended with a hopper up the middle that a CVA infielder grabbed and stepped on second base for the game ending force-out. With the win, the newly crowned Section 7 champions advanced to the 10-team Southern California regional tournament, the last stop for this age-group. Lakeside National’s 10U all-star roster included the following players: Brody Jackson, Bryce Melville, Caleb Levis, Dylan McCarthy, Easton Lyon, Gabe Setterberg, Ivan Trimm, Jacob Cooper, Joseph Clark, Mason Miller, Mason Reynolds, Tanner Evans and Trevor Thomason. Willie Clark served as team manager. 12U ALL-STARS Lakeside National defeated Rancho de Oro, 13-3, to win the district title and embark on the long and sometimes winding road to the iconic Little League World Series in South Williamsport, Pa. Lakeside National opened sectional play with defense at the forefront in a 1-0 victory over District 22 champion Calexico on July 16. The East County team’s bats came alive in an 11-7 win over District 42 champion Sweetwater Valley the next day, with a grand slam by Gavin Kelly providing the margin of victory. The July 17 win advanced Lakeside National to the championship game on July 20 in a rematch against Sweetwater Valley after the latter team eliminated District 66 champion Spring Valley, 19-0, in a losers bracket contest on July 18. Lakeside National needed only to defeat Sweetwater Valley in the July 20 game to advance to the Southern California regionals while Sweetwater Valley had to defeat Lakeside National twice in double-elimination play to advance to the next round. Sweetwater Valley put all facets of its game into play with 18-0 and 20-0 wins to indeed advance. Sweetwater Valley out-hit Lakeside National 21-4 in what proved to be the championship game on July 21. Lakeside National’s 12U allstar roster included the following players: Casey Keller, Dax Amantea, Diego Jones, Gabe Lynn, Gavin Kelly, Greyson Marsh, Jonathan Nochta, Liam Dailey, Nathan Eckis, Roman Willis, Santiago Benitez, Shayne Whitmore and Taj Carrillo. Steve Marsh served a s team manager. 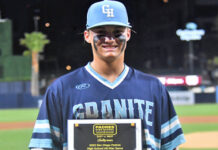 Parity seemed to rule in this year’s CIF baseball playoffs