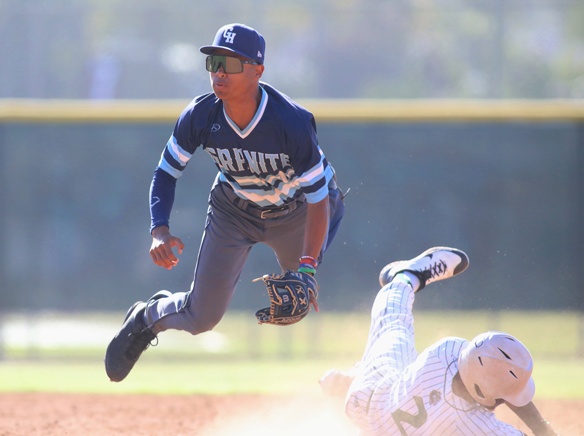 It was a first for Granite Hills High School as both the baseball and softball teams played for San Diego Section divisional championships the same weekend at the same venue. The school’s baseball team, top-seeded in the elite Open Division, faced off against the second-seeded La Costa Canyon Mavericks May 27 at UC San Diego’s Triton Ballpark. The Eagles entered the game riding a string of three consecutive playoff victories before falling, 10-3, in eight innings in the Open Division title game. The school’s softball team took another route to the finals, also held on the UC San Diego campus. The Lady Eagles took the field for six playoff games in the double-elimination tournament, winning three consecutive games while on the brink of elimination following a 2-0 loss on May 21 to top-seeded and league champion Helix Charter before finally subduing third-seeded Poway, 8-4, on May 28 to win the division in upset fashion. It took every player and every ounce of determination on both fronts to reach the championship round. “Our baseball team had a great year, however, it was rough for our entire Granite Hills baseball community to come up short,” GHHS head coach James Davis said. Davis also serves as the school’s athletic director. He expressed pride about the first ever double finals showcase. “It was great to see both softball and baseball in the finals,” he said. Despite finishing in fourth place in the regular season Grossmont Hills League standings with a 4-6 record, the Lady Eagles (20-12-1 overall) took flight in the playoffs. Granite Hills edged fifth-seeded Valhalla, 7-6, in the first round of double-elimination play on May 19 to advance to meet Helix in the second round on May 21. Granite Hills would meet Valhalla and Helix again after eliminating second-seeded El Capitan, 10-4, in third-round play on May 24. The Lady Eagles finished one run ahead of Valhalla once again with a 5-4 victory in the opening game of the challenger bracket semifinals on May 26 to draw a rematch against Helix in the second game. Granite Hills won the challenger backet final against the Lady Highlanders, 4-2, to slip into the championship game. Sophomore Makenna Hines had two hits, including a home run, to power the Lady Eagles with three RBI in their playoff opener while senior Taylor Rose drove in two runs with three hits. Seniors Brenna Diaz and Chloe Knepp both chipped in with one RBI. Rose earned credit for the win by pitching 6.2 innings with seven hits and six runs allowed, though only one was earned. Knepp earned the save with one-third of an inning of scoreless relief. Sophomore Sofia Mujica led the Lady Eagles’ 13-hit attack with four RBI in the win over El Capitan while senior Kayla Fox had two RBI and seniors Knepp and Rose, along with sophomores Kailey Sandoval and Hines, each drove in one run. Rose weathered 10 hits over six innings while allowing three earned runs. Sandoval and freshman Audrey Smale both doubled in the rematch against Helix as Smale, Knepp, Mujica (home run) and Hines each picked up one RBI in support of Rose and freshman Kaleigh Baugher in the pitching circle. Sandoval scored two runs and drove in three to highlight the Lady Eagles’ comeback win in the championship game while Mujica scored three times. Granite Hills saw an early 2-0 lead evaporate via a three-run home run by the Lady Titans in the bottom of the first inning. Granite Hills later came back to tie the game, 4-4, in the top of the third inning and later take a 5-4 lead in the top of the fifth inning before finally taking command of the game with three runs in the top of the sixth inning ignited by a bases-clearing triple by Sandoval. The Lady Eagles won their first Division II championship after previously winning the Division I title in 2008 and placing runner-up in the Division II final in 2015. BASEBALL Granite Hills defeated eighth seeded and fellow Grossmont Hills League rival Helix Charter, 6-1, in the opening round of the playoffs on May 18 while fifth-seeded Santana upset fourth-seeded Rancho Bernardo by that same score in upper bracket play. Both Granite Hills and La Costa Canyon received berths in the Southern California Division I regional playoffs. The Eagles lost, 5-2, at top seeded JSerra on May 31 while the third-seeded Mavericks lost, 5-1, to sixth-seeded Huntington Beach. Granite Hills finished its marathon season with an overall 24-7 record while LCC was 24-11.