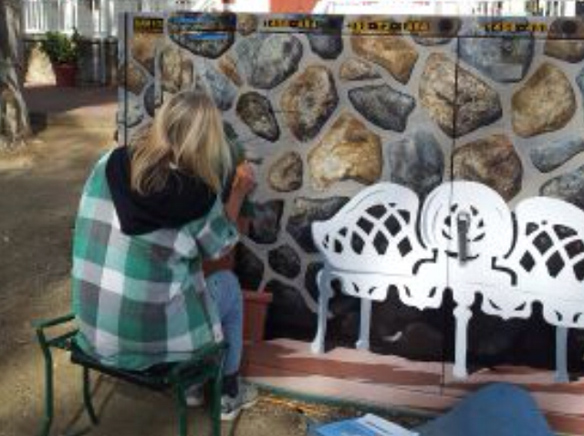 Have you seen the beautifully painted utility box between the Alpine Sun and the Alpine Women’s Club on Alpine Boulevard?  Beverly Brady, an outstanding artist who lives in our area, is painting the SDG&E electrical box that originally blocked our view of our elegant historical town hall building. She is demonstrating her amazing talent and is actually hiding this atrocity through the art of optical illusion.  The technique is called “Tromp-l’oeil”, pronounced ‘trump loy’, a French word that literally translates from French to mean “fools the eye.”

Tromp-l’oeil has been used since ancient times and can be seen in Italian Renaissance pieces such as “The Oculus” in a Palazzo Ducale, Mantua.  This perspective illusionism was often employed in Greek and Roman murals in such places as Pompeii.  The typical Trompe-l’oeil mural might depict a window, door or hallway to suggest a larger and more sumptuous living area.  There is even a story about a contest between two painters born around 464 BC.  These painters were set to produce a still life so convincing that the birds would fly down to peck at the painted grapes.

Many have commented on Ms. Brady’s work.  It has been credited as a wonderful piece of beautification for Alpine.  Brady began painting the Alpine utility box on November 3, and will be painting through December.  On the front of the box is a replication of the white bench that sat for years in front of the Alpine Woman’s Club on their brick porch area.  The rocks that surround the box are designed to blend into the rock foundation of the historical building, built in 1899.

As cars have passed the corner of W. Victoria and Alpine Boulevard, many have rolled down their windows to wave at Brady and thank her for doing such a great job.  The open and gracious attitudes of Alpine have been noted, and Brady would like to let everyone know that she appreciates every one of them.

Brady belongs to the Point Loma Artist’s Association.  This association celebrates fine art, and fine artists.  If you visit their site (www.pointlomaartists.com) you can view other pieces that she has created such as ‘Leaving Death Valley’ or a whimsical “Chevey at the Levee”.

This is the 6th utility box Brady has been commissioned to paint.  Many of the boxes are in San Diego, but this particular box was commissioned by SDG&E’s Don Parent, who felt that it was unfortunate that the box had to be placed right in front of one of our most historic and beautiful buildings.