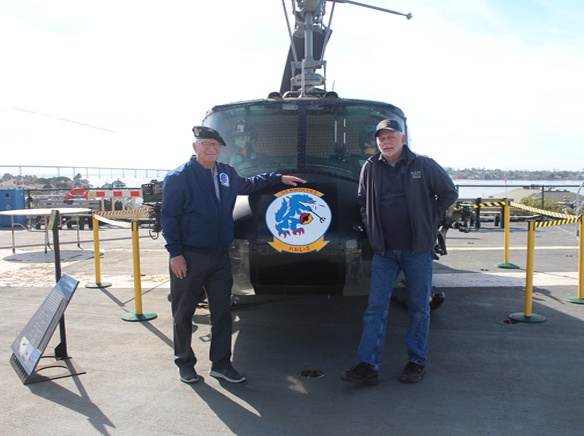 Gary Ely recognized the Viet­nam-era draft was coming his way and decided to choose his fate and join the Navy rather than waiting for the Army to call him up for service. Once in, he volunteered to serve in the HAL-3 helicopter attack squadron, the Seawolves. Now, 52 years later, he’ll be joining about 99 other Seawolves on the first Honor Flight out of San Di­ego organized solely for a group of Vietnam Veterans.

Honor Flight Public Rela­tions Director Holly Shaffner described the whirlwind Honor Flight as a trip to Washington D.C. which includes a stop at the Lincoln memorial as well as the World War II, Korean War and Vietnam Veterans war memorials. It is, she said, as a chance to “give Veterans the royal treatment” while volun­teers on the trip get to converse with “living history” for three days.

However, after realizing they had effectively reached most of the WWII and Korean War veterans who live in San Diego county, the next phase of the non-profit’s work fell into place: seeking out Vietnam veterans for a similar trip. They decided to start with the Seawolves.

“We’re 100% donor funded and once we knew we’d be able to take a fall trip, the Seawolves stuck out. They’re the most decorated squadron in Vietnam history yet weren’t even for­mally recognized until 38 years after the war. The missions they went on— there was no squad­ron that had more combat mis­sions and what they did, well, we decided this first flight of Vietnam-era veterans, already scheduled for September, will focus on the Seawolves,” Shaff­ner said.

The Seawolves were born out of necessity and relied on inge­nuity. Army helicopters, crewed by the Navy, were used at the start of the Vietnam war for complicated operations at night and over water. The approach worked so well that some of the HU-1 helicopters, or ‘Hueys’ were reappropriated by the Na­vy in an effort to reduce Army dependency.

Ely’s attempt at joining the Navy to “sleep on clean, white sheets” resulted in just one WestPac cruise as a sheet metal worker, ship’s company on the USS Coral Sea before he was approached with an offer: vol­unteer to train as a helicopter door gunner and he’d be home sooner.

“It was a few things: someone saw my rate and they wanted my skills, along with someone who had time left in country. By ‘70, I was in Vietnam,” Ely said.

Standing atop the USS Mid­way, an aircraft carrier with its own storied history in Vietnam but now a museum moored in San Diego harbor, Ely eyeballed the Huey parked on the flight deck near where Shaffner pub­licly announced the fall Honor Flight for Seawolves. His spe­cialty in Vietnam, he said, was being able to change the tail ro­tors of a Huey.

“You took care of business,” Ely said, summing up 14 months of detachments in one sentence.

Smiling, he said they were “either flying or listening to tape recorders in the hooch,” ready to fly at a moment’s notice.

By the time the Vietnam war ended, the Seawolves had completed over 78,000 missions with 131,000 flight hours. They also racked up 4,000 confirmed kills with another 4,200 prob­able kills.

“I think with our Vietnam vets, they’re going to come to this trip with a different dy­namic. We say our world war two vets are the greatest gen­eration, they saved the world from Hitler, then rolled right into Korea. For the Vietnam veterans, though— the home­coming we’re going to be able to give to them, well it’s going to be huge,” Shaffner said.

WWII veterans came home and went right back to doing everything they did before the war, treated as heroes then ac­cepted back into the same jobs they left behind, Shaffner said, whereas “the Vietnam veterans had it much tougher” and what they came home to was very dif­ferent.

She and other Honor Flight organizers are taking a different approach from the celebratory flight they typically put togeth­er for WWII veterans. That trip features a ‘mail call’ with let­ters collected from friends and family handed out in gratitude, a one-to-one guardian ratio so every veteran has a dedicated person to accompany them throughout the trip and a stop at the Tomb of the Unknown Soldier where wheelchair and walker access is provided.

The Seawolves trip, and sub­sequent flights for Vietnam vet­erans are being crafted specifi­cally for that cohort.

“We’re tailoring our itiner­ary to spend more time at the Vietnam veterans wall. The possibility exists that out of the 100 going, some may have never seen the wall. We want to give them closure, the opportunity to work through their emotions. Remember, 44 Seawolves lost their lives in Vietnam. Then, what they came home to was very different from what the world war two veterans experi­enced,” Shaffner said.

They’re “hoping the home­coming they receive when we fly home that Sunday” is huge, Shaffner said.

Decades later, Ely downplays falling off a flight deck, being on river patrol, watching ex­plosives behave like grapeshot, medevacs. Instead, he lingers over a description of irreplace­able camaraderie.

“We talk about how signifi­cant the brotherhood was in HAL-3. To this day, there is a friendship, a brotherhood that doesn’t exist anywhere else. I would do it again,” Ely said.