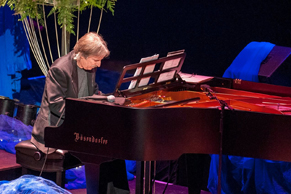 A special event is coming to Descanso on January 13. Pianist, guitarist, vocalist and songwriter John Nilsen is coming from his Pacific Northwest home to Descanso to perform a solo piano concert. Chapel of the Hills Community United Methodist Church is excited to host this accomplished musician in a free, one hour concert for the third year in a row. We want to get the word out to music lovers in the East County and beyond.

A special event is coming to Descanso on January 13. Pianist, guitarist, vocalist and songwriter John Nilsen is coming from his Pacific Northwest home to Descanso to perform a solo piano concert. Chapel of the Hills Community United Methodist Church is excited to host this accomplished musician in a free, one hour concert for the third year in a row. We want to get the word out to music lovers in the East County and beyond.
A free will offering will be collected, and there will be an opportunity to purchase John’s music CDs during a simple reception following the performance. The church will provide light refreshments and a chance to chat with the artist. Please see the attached poster for more details. Also attached is John’s bio, if you wish to use any of its additional info. John Nilsen Biography 2017

John Nilsen is a pianist, guitarist, vocalist and songwriter and one of the Pacific Northwest’s most successful performance and recording artists. Magic Wing, the record label Nilsen founded thirty years ago, has a catalogue of nineteen titles, all distributed internationally and most licensed outside the United States in numerous countries,
Nilsen’s record sales far exceed a million copies. 230 of his compositions and arrangements receive BMI royalties. Nilsen’s first three titles, all piano solo records, were originally recorded and released with Eagle Records in Los Angeles. Nilsen is a prolific performer.
Over the past thirty-five years, he has averaged 225 shows a year, performing as a solo pianist, solo guitarist and as a member of his two bands. John Nilsen and SWIMFISH, a folk-rock band, features John Nilsen/guitar, piano, vocals; Dave Captein/bass; Mike Snyder/drums; Bob Logue/guitar, vocals; and Don Woodward/guitar, harmonica, mandolin, vocals. The John Nilsen Trio, which performs a mix of folk, classical, jazz and rock, features John Nilsen/piano; Jeff Leonard/bass; and Jason Moore/percussion. Nilsen tours incessantly as a solo artist and as a member of his bands. He has performed countless times in every state, as well as overseas in Europe and Asia. He has appeared with such luminaries as Jose Feliciano, Jesse Colin Young, David Foster, Marc Cohn, Kenny G, Alex De Grassi, Montreaux and others.
Nilsen is a native of the Pacific Northwest, born in Seattle and raised primarily in Portland, where he has been a resident for many years. Nilsen began studying piano at age six and guitar at age twelve. He attended Southern Oregon University, graduating with a Bachelor of Arts in English.
He loves to get out on the rivers, into the forests and onto the mountains of the region. The people, landscapes, weather, and tenor of life in the Pacific Northwest frequently influence Nilsen’s musical themes. The late Dan Peek, founding member of the rock band America, wrote: “You deserve to be heard!”
The Oregonian has written, “John Nilsen’s career is the envy of many musicians.”
In 1995, in recognition of his achievement and leadership in the performing arts, Nilsen was honored by his alma mater with the Distinguished Alumnus Award, the most prestigious award bestowed by Southern Oregon University on graduates.
He was chosen to be a Deering Banjo artist in 2016 in recognition of his piano, guitar and songwriting talents. Nilsen speaks and conducts residencies on songwriting and musical performance at schools throughout the country, including every school in his home district outside Portland. He derives particular satisfaction from instructing and encouraging young artists.
Nilsen’s newest release, Local Ocean, featuring SWIMFISH, was released in January 2017 and is distributed by SONY/RED/MRI. Recording sessions for his 20th production will commence during the summer of 2017. That production, as yet untitled, will feature Nilsen’s piano compositions with orchestral backing. 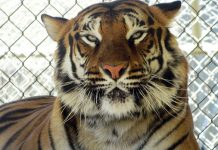 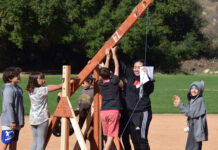 Flying pumpkins a catapult for learning