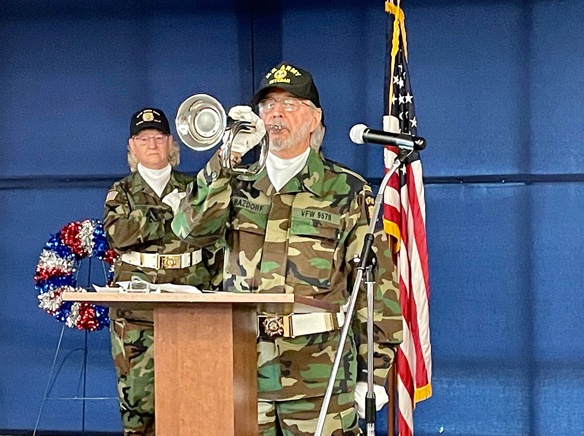 Seventeen new veteran’s names were added to the Wall of Honor- in conjunction with Memorial Day.

The memorial which encircles the fountain outside the Community Center was originally envisioned in 2011 as a single wall lined with tiles engraved solely with names of local residents who had served in the military. An accompanying walkway to commemorate veterans who reside outside Alpine with similarly engraved names was part of the original plan. However, the division proved problematic with families wanting to keep their names together and one Wall of Honor was established for all veterans.

Wall of Honor Chairman Dan Foster said the tiles represent men and women who, regardless of rank or deployment, deserve to be recognized for their service to the nation.

“It does not matter if you never even left San Diego— you still put on that uniform and the danger was always present but you stepped up to serve the United States of America,” Foster said.

Although there is still space left on the wall, Foster said the committee has discussed what to do when space runs out. The wall was last expanded in 2016 with two new sections added to accommodate more veterans’ names.

“We are discussing the addition of new walls but that takes money and the ‘okay’ of the Community Center,” Foster said.

In the meantime, he continues to organize commemorative events twice a year. Originally held outside at the wall, the committee shifted to hosting the event inside the community center when they outgrew the memorial garden at the wall.

Foster said he chooses speakers for what they have to say and the message they want to send, keeping an eye and ear out from one event to the next for possible participants.

This year, Foster and other organizers planned well in advance for the Memorial Day event. In a speech 99-year old Army veteran Bill Ridenour wrote back in April, he recalled “being shipped off to the jungle of the South Pacific” and recognizing “history in the making” when he learned a peace treaty had been signed, leaving him free to return home to his young wife and baby boy.

Planning starts for each event just after the previous one is held. Organizers have seen as many as 300 people turn up for the semi-annual event, depending on how many new names are being added to the wall with each iteration.

“Many are involved and many make it special… My goal is to reach and touch everyone in the room. I want to be genuine, truthful and do my best to not leave anything out. And, I want to do the best I can at saying ‘thank you’ and ask everyone: please never forget the men and women who did so much for the United States of America. I am inspired by our country, the good people in our country and so many who have touched me in my 74 years,” Foster said.

The Wall of Honor is located outside the Alpine Community Center at 1830 Alpine Blvd.