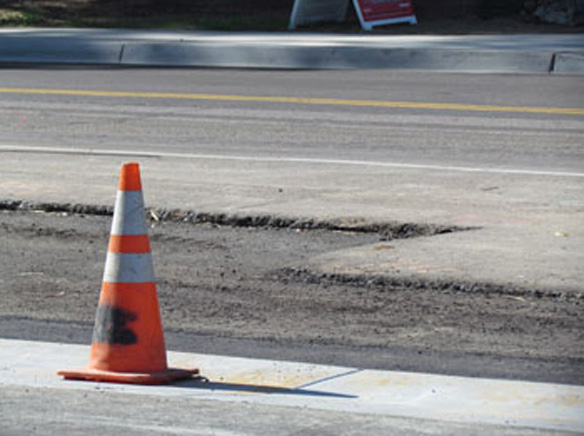 A Special Meeting was called by Chairman Greg Fox of the ACPG and was held on Monday, October 8, 2012.  Michael Long and Terry Rayback made a presentation regarding the County of San Diego's position to repave Alpine Boulevard now versus later.  Certain issues have arisen from the design of the drainage on Alpine Boulevard that would create much more interruption to the Community of Alpine.  The work in question is on Alpine Boulevard from Tavern Road to South Grade Road.

A Special Meeting was called by Chairman Greg Fox of the ACPG and was held on Monday, October 8, 2012.  Michael Long and Terry Rayback made a presentation regarding the County of San Diego's position to repave Alpine Boulevard now versus later.  Certain issues have arisen from the design of the drainage on Alpine Boulevard that would create much more interruption to the Community of Alpine.  The work in question is on Alpine Boulevard from Tavern Road to South Grade Road.

The County is asking to repave the Boulevard now so they can go back to the drawing board and find a way to expedite the work on the drainage system for the least amount of interruption to the community of Alpine.  Currently, the work would take between 30 and 36 months.  If the Phase 2 landscape is not included with the drainage system this would require an additional environmental study, (EIR).  A letter from the County was given to the Board explaining the re-evaluation of the drainage work to lessen the impact and cost of the work.

The County is hoping to find a way to decrease the depth of the drainage system.  Their hope is not to go under the power-link system already in place.  One thought is to use off-site drainage to lessen the impact to the businesses on the Boulevard.  They are also hoping to minimize the amount of tunneling and tearing up of the Boulevard.  It was brought up that in March the County had three options:  cap the existing drains and have EIR completed to go forward; cap drains only to the sides of the Boulevard; there are 18 gutter inlets now, aren’t they all connected to storm drains?  Why wasn't the board told they did not meet the 100 year flood plain requirements?   Mr. Long apologized for any misinformation pertaining to the storm drains.

He said that there needs to be additional inlets and piping.  Some that are in place are 20' to 30' deep and they do empty into El Capitan Reservoir.  Long also said that the Phase 1 improvements did not change the levels of inundation modeled by the hydraulic study.  The flooding of Tapatio’s came from the property behind the restaurant.  However, the County made changes and a culvert was put on the west side of the property.

Long conceded that the Phase 1 improvements did cut off some private property drains and Phase 2 will address all of these issues.  The Alpine Sun flooding was due to the Phase 1; also Al Pancho's restaurant is affected by flooding do to the streetscaping.  The Community Center parking lot also flooded during the last rainstorm even though, it has a drainage pipe but the drainage is increased substantially and gushes so much that it goes over the pipe.  Also, the east side of the Firehouse Barber Shop flooded in the recent rainstorm.  Mr. Long said the parking lot flooding is coming from the hill leading to AES.

The plan to fix The Alpine Sun's flooding problem is to put 'catch basins' into the flower areas. They will use a 6" PVC pipe to tie into the drain and the water will run into the drain swale and down to the culvert.  When the drainage is installed they can tie in the Phase 2 street scape and not need to have a new EIR.

Terry Rayback said that SDG&E was asked to choose what they could do and they opted not to consider opening their EIR to include the drainage.

As Tom Dyke said, when the ditch was opened that is when the drainage should have been put in place.  He opined that no one 'in' the construction business did any work on the Boulevard.  SDG&E did the design documents for the power-link and did not include the street scape nor the drainage requirements for the 100 year flood plain.

The County clarified that they did negotiate with SDG&E to not pave down the Boulevard.  They confirmed that the repairs to the Boulevard were designed to make the road handle rain inundation as it handled it before the repair.  The Phase 1 project was to only do the street-scape, not to fix drainage.  Most of the drainage problems have been here for a long time and were not created by the Phase 1 improvements.

The County let the Board down – Chairman Greg Fox said the County should have asked if there were any more issues to be covered.  Greg had met with Mr. Long and did show him additional issues and these were not considered either.  But Fox said the meeting was to make a decision regarding the pavement being done now and what surface would be the best for the time being, until the drainage issues were addressed.
Some members wanted to use the inferior aggregate now to save money and also to allow businesses that needed to make improvements by cutting into the road for utility hook-ups.  The worry was if businesses had to make cuts into the asphalt and then repair the road, would they be forced to use the more expensive rubberized asphalt or could they use the cheaper aggregate.  If businesses were able to use the inferior surface the ACPG wanted the County’s assurance that in three years, the County would repave the Boulevard with the rubberized asphalt at County's cost.  The County said the work would be done now as well as the future with no additional cost to Alpine.

The vote was called and the decision was to install the rubberized surface now and again when the drainage work is completed.  The County said the current cutting policy (Micheal Long said he did not like the word ‘moretorium’) would not stop businesses from cutting into the new pavement and then using the cheaper aggregate to repair the road.  The cheaper aggregate could be made to meet the rubberized surface.
The County was asked how much SDG&E give to them for the asphalt work and $840,000 was the figure.  The amount is what SDG&E people would have used to repave.  The County confirmed that in approximately three years they will do rubberized asphalt again at their cost.

However, the rubberized asphalt is temperature sensitive, and this will affect whether or not they can use it. The rubberized asphalt requires heat to ‘cure’, and if the temperatures are too cool, then the asphalt will deteriorate quickly in the rainy season.  This has already occurred once before when this particular asphalt was used on the Boulevard near Willows Road about four years ago.  Repairs were made to the road about three times after the asphalt cracked and washed out creating large potholes.  The plan is to mobilize by the 22nd of October, it will take ten days to lay.  If the weather changes and is too cold, the cheaper pavement will be used.