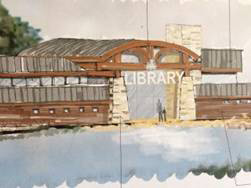 By Joe Naiman
For The Alpine Sun
The San Diego County Board of Supervisors approved the issuance of a design-build contract for the new Alpine library.


By Joe Naiman
For The Alpine Sun
The San Diego County Board of Supervisors approved the issuance of a design-build contract for the new Alpine library.
The supervisors’ 5-0 vote July 30 authorized the director of the county’s Department of Purchasing and Contracting to take any action necessary for the issuance of a contract while designating the director of the county’s Department of General Services as the county officer responsible for administering the contract.  The action also authorized the acceptance of up to $1 million from the Alpine Library Friends Association for furnishing, fixtures, equipment, and other enhancements while appropriating that money into the capital project and authorizing Board of Supervisors chair Greg Cox to sign letters of appreciation for donations over $500.  The motion also approved an addendum to the environmental Mitigated Negative Declaration.
“It’s definitely good news,” said Supervisor Dianne Jacob.  “People in Alpine have been waiting for this.”
The wait dates back to at least April 1999, when the Board of Supervisors approved a long-term library facilities capital improvement plan listing 19 needed new or replacement branches.  In March 2002 the Board of Supervisors authorized the application of a grant for Proposition 14 funding, which provided $350 million in matching funds to build and renovate public libraries throughout California.  Although the competitive Proposition 14 grants did not fund the Alpine library, the preparation work included a Mitigated Negative Declaration which subsequently had to be only updated rather than fully prepared.  In March 2008 the supervisors authorized the purchase of an 0.78-acre parcel adjacent to the Alpine Community Center.
On June 25, 2003, the supervisors passed the county’s 2013-14 budget which included $9,811,301 for construction of the new Alpine branch library.  The existing 3,018 square foot facility will be replaced with one totaling approximately 13,000 square feet.
The design-build process is a two-step procedure.  The first step invites teams to submit statements of qualification, which will be reviewed by a technical committee who will prequalify teams.  In the second step up to three prequalified teams will be invited to submit designs, and a selection committee including county staff and Alpine community members will review and rank the designs in order of best value before conducting negotiations with the highest-ranked team.
The authorization to accept the amenities from the Alpine Library Friends Association will cover future funding; at this point the organization has raised approximately $250,000.
Construction is scheduled to begin in 2014 and be complete in 2015.  “It’s been a long time coming,” Jacob said.