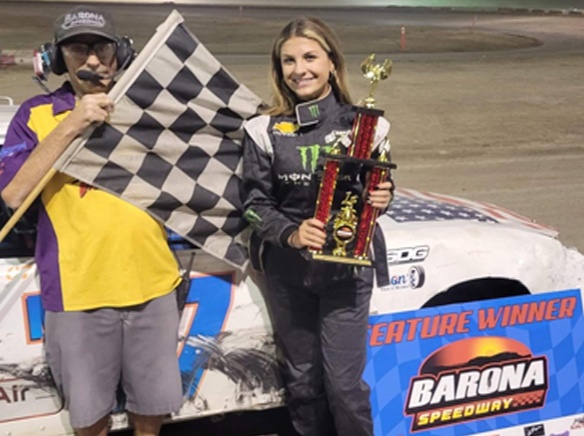 “I don’t know how I did it, and nobody else does, either,” Constance said.

Constance was passed by Chris Niemi on the final lap between the final turn and the finish line. She also won her heat race that evening.

A driver must be at least 14 years old to drive in the International Motor Contest Association classes. Constance turned 14 in August 2021 and began racing in the IMCA Sport Compact class in September 2021. Constance races a 1995 Pontiac Spitfire.

When the school year begins Constance will be in tenth grade at El Capitan High School. She attended Descanso Elementary School and has lived in Descanso since she was 1 1/2 years old. The family previously lived in Spring Valley, and Constance was born at Grossmont Hospital in La Mesa.

Constance began her heat race on the outside of the front row. Andrew Schmitz had the pole for the heat race. Constance took the initial lead and remained in first place for the rest of the eight-lap race. “I got by him on the start and I just had my line and didn’t let anybody get by,” she said.

The main event was 20 laps, and Constance also began that on the outside of the front row while Enzo Deckers was on the pole. Constance once again took the initial lead.

In the 16th lap Kevin Reuter took over the lead. “He just got that one opening and just took it,” Constance said.

After the race Reuter was penalized two positions for rough driving, so although he was the first driver to take the checkered flag he was given third place. Constance held second on the track until being passed by Niemi at the end of the race.

“He got me after getting me to get out of his way,” Constance said. Constance knew that she wasn’t able to maintain her line. “I had two rear flats, so I was struggling a little bit to keep my car straight,” she said. 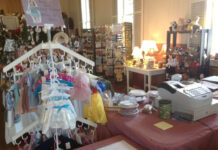 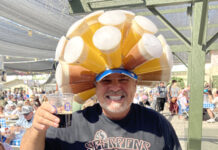 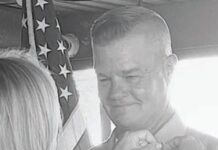