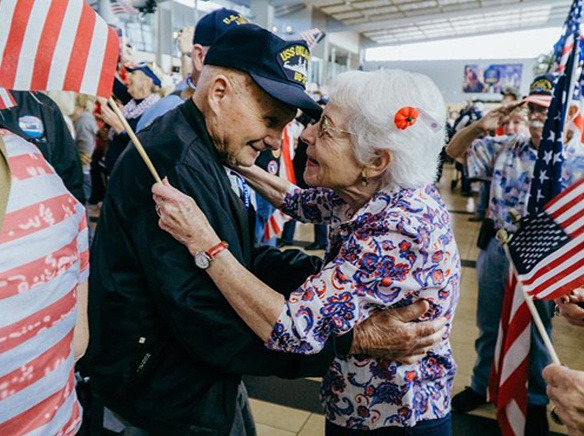 Officially, the mission of Honor Flight is to transport United States’ Veterans to Washington, D.C. to visit the memorials dedicated to honoring those who have served the country. Unofficially, Honor Flight San Diego Director Holly Shaffner said the trips provide the non-profit organization with a chance to “give Veterans the royal treat­ment”. While participants frequently say it was the best experience of their life, she said, volun­teers get to converse with “living history” for three days.

“We fall under the larger Honor Flight Network umbrella. We were started in 2010 by Dave Smith, who many people have met at the Wall of Honor events. He took his father, a World War II Veteran on a trip called a Lone Eagle flight because they didn’t have a hub here yet. When they got back to San Diego, he called me through our flight network and said ‘I want to volunteer for Honor Flight’ and when I told him there was no Honor Flight in San Diego, he said ‘well, there will be now’.

Since 2010, the local group has taken moret han 1,400 World War II and Korean-era veterans on their flight, as well as any veterans from any era that have terminal illnesses.

The whirlwind trip has 80 veterans, each with an assigned guardian or, as Shaffner calls them, Battle Buddies fly directly from San Diego to Washington, D.C. Over the course of two days, they visit the Lincoln memorial as well as the World War II, Korean War and Vietnam Veterans War me­morials.

Korean War-era Army Medic and El Cajon resident Tony For­chette described himself as the “kid” from his flight.

“I really think the staff that put this together did an ex­cellent job. They were very thorough and it was interest­ing how they had some of the Senior World War II Veterans speak and tell their story. Ev­eryone appreciated that. I’m 85 years old so I’m the “kid” on the flight, they’re all in their 90s,” Forchette said with a chuckle.

“We go to Arlington National Cemetery where we have head of the line privileges right at the ropes because we confirm with them ahead of time and all the veterans are in wheelchairs at The Changing of the Guard ceremony, which is a really out­standing moment. After that we go to the Tomb of the Unknown Soldier, then the Air Force and Marine Corps memorials, then we end our day at the Navy Yard museum which is a special treat because not all the honor flights get to do that. We just are fortu­nate to have a captain who gets us base access and we see the two museums that they have there at the Navy Yard,” Shaff­ner said.

The fast-paced event is “just go-go-go,” Shaffner said, and participants often get home and say it was the best weekend of their life.

“To hear that from a World War II Veteran— I mean that is humongous, you know when they’re in their 90s and it was one of the best weekends of their lives,” Shaffner said, her eyes glowing with delight.

World War II Army Veteran and La Mesa resident Clayton Baum, who participated in the Omaha Beach landing and was later awarded Battle Stars for Normandy, Northern France, Rhineland and Central Europe said he has never experienced anything like the trip in his life.

“I felt so unworthy of the crowd when we landed, I just didn’t know what to say. I’d for­gotten all about the war until that flight. I happened to be a substitute who got the chance to go and I don’t know how I got that lucky,” Baum said.

Capt. Steven Shepard, a key volunteer with the program, learned Baum had lost his son in Vietnam and brought flowers for Baum to lay at the Vietnam Veterans Memorial.

“Captain Shephard and his wife had bought flowers and we laid them at the wall, stepped back and said a prayer and ev­eryone just had tears running from their eyes. I’m so proud of my son, he was a paratrooper who saved his unit and I’ve re­ceived letters from people who were with him, including his Sergeant who said ‘of all the men that he had lost, my son was the most precious to him because he took care of his men first.’ Captain Shephard and his wife understood. It was just a wonderful, personal experi­ence,” Baum said.

There are many unique sto­ries out there, Shaffner said, all from “these humble heroes who came home from the war didn’t tell their story” and instead just went about their lives.

“When their sons and daugh­ters are their Guardians on the flight they say, ‘oh my goodness. I never knew that dad was in Pearl Harbor’ or ‘Dad was with Iwo Jima, you know’… Or, ‘I never knew that Dad was there on D-Day’ because they went away to war, did their job then came back to work in construction, as milkmen, as postmen. They came back and had families and never even talked about their ex­perience,” Shaffner said.

Each flight requires about $250,000 in fundraising in ad­dition to what guardians spend on the trip, requires a team of volunteers and takes months to plan.

“For them to have three full days where we just honor them— they totally deserve it,” Shaffner said.