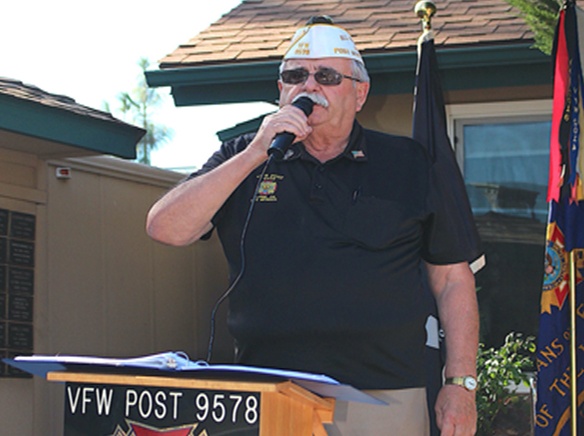 Alpine VFW Quartermaster Carl Silva has been named a 2021-22 Aide-de-Camp for the national organization.

Being named Aide-de-Camp, Silva said, is recognition of his service to the VFW and how he has conducted himself as Quartermaster, but also confirmation that post leaders are changing the local image of the organization.

Prior to the COVID-19 pandemic, Silva was working alongside former Post Commander Jack Gauthier, current Post Commander John Sullivan and Post Chaplain Theo Bazdorf to transform the veterans service organization from one geared toward individual servicemembers to a more family-friendly meeting place.

“It’s been a group effort for many years now— we want to be a family friendly post where someone can go while their spouse is on deployment.

Being an Aide, he said, means questioning how the non-profit, volunteer organization recruits and retains members, “doing everything we can to improve membership” while overcoming the same challenges many forprofit restaurants and businesses face as the pandemic passes the 18-month mark.

One big challenge: food cost for the group that regularly hosts meals like steak dinners and Thanksgiving celebrations for any veterans in need.

Although the post is generally a members-only institution, Friday and Saturday’s meals are always open to the public. The Friday dinners and Saturday breakfasts rely on items that have increased in cost, Silva said and he is conscious of having to keep costs down while the nation rights itself economically in the post-COVID months.

There is a return to normalcy on the horizon, the Quartermaster said, and he projects that by June 2022, the post will be back to ‘business as usual’. Pulling out of the economic downtown is almost ‘like a game’ at times, he said, where you know the steps you have to take to get to the end as a winner and the challenge lies in simply making it happen.

“We’ve tightened up a lot” and donations the post has received have helped immeasurably, he said.

“Do you know that one person privately sent us a $2,000 check? I asked why and he said it was just because he knew we were going through tough times and wanted to help. Another person donated an entire antique doll collection for us to sell to collectors, treasures you know? We’re getting through because of the community,” Silva said.

“It makes it difficult to feed people at some of our larger meals but let me tell you, our partnerships are amazing. The East County Transitional Living Center— talk about a wonderful partnership. They run a whole program with chefs who come up to cook here and it is a win-win situation,” Silva said.

A modern VFW post means having “a lot of couples where both have served,” husbands in the auxiliary and families with multiple generations of veterans who all belong to the post.

“Come on a Sunday and you’ll see a table that has grandma and mom and dad and the kids. The only way the VFW can survive is by being family oriented,” Silva said.

Post leaders are also conscious of connecting with children in local schools after many months of distance learning.

Talking about history can be a challenge with some of the post’s youngest visitors, Bazdorf said. He barely remembers being about two and a half years old, watching both his uncles get drafted. Still, he andSilva will be visiting Shadow Hills Elementary school this week to talk about the flag in advance of Veteran’s Day.

On November 11, Sullivan will welcome residents to their traditional Veteran’s Day ceremony, ringing the memorial bell mounted outside the post and calling out names of deceased service and auxiliary members, a near-return to events as they happened before the pandemic.

The event is not only open to the public, but Silva also said they welcome the public and “want people to know that the people we went overseas to defend are always welcome here,” and want locals to look forward to attending events at the post.

“We’re all in this thing called the world together,” Silva said.