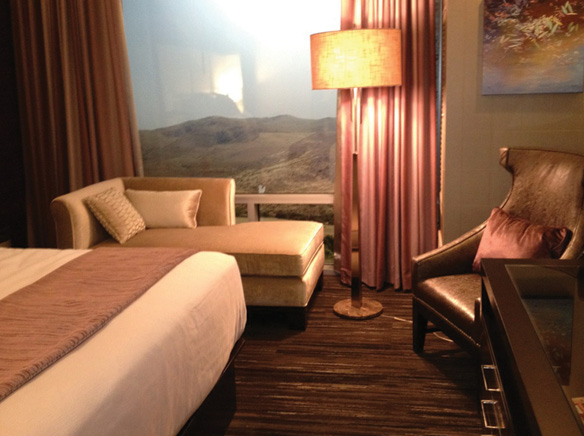 Tuesday, hundreds of local residents and Viejas Tribal members gathered to celebrate the “topping off” ceremony at the site of the new  5 story Viejas Hotel.  The new hospitality venue will connect directly with the Casino and will feature 128 rooms including 99 deluxe rooms and 29 luxurious suites.  The hotel will include a large pool and hot tub, expansive patio areas, a business center, fitness facility and limited room service.  Rooms will provide guests with large showers, RFID locks on the doors, refrigerators, hair dryers, coffee makers, Beauty Rest euro top mattresses, IPOD clock radios, two phones, free internet and direct connect/wifi, his and hers robes, 40” Samsung flat screen TV’s and nightly turndown service.  Some suites will even feature fireplaces.

The 5 story Viejas hotel is scheduled for opening to the public in Spring of 2013 and will become the most luxurious of all of the area hotel properties.

Viejas Tribal Council members signed their name to the ceremonial steel beam which will become part of the final construction. The beam will be displayed until the hotel opens.

Meanwhile, over at the Viejas Outlet Center, there is an virtual display of the finished hotel and various room categories.  Open and free to the general public this display will allow guests to actually feel like they are in the finished hotel.

Viejas Chairman Anthony Pico told the assembled crowd that the hotel construction has provided over 400 local jobs and he thanked them for their dedication and skill in building this premier hotel.  Pico went on to say that this hotel is an important milestone for the tribe and the entire region.  The hotel will not only provide further security for the tribal member, but will also become another economic engine for Alpine, East County and San Diego County.