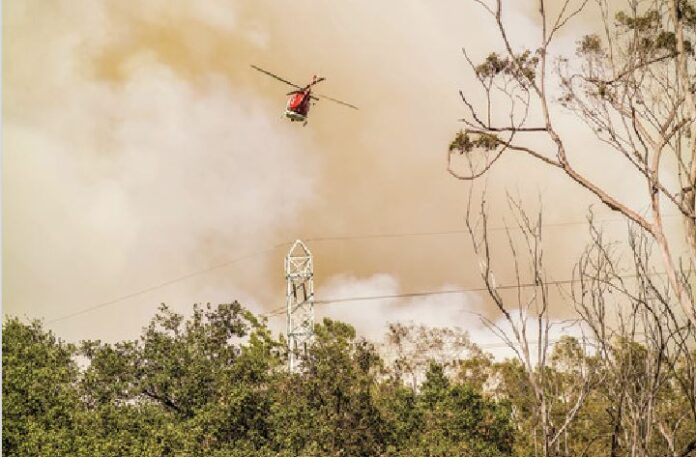 One vote approved the acquisition of a twin engine helicopter. The other approved motion involves a Memorandum of Understanding with San Diego Gas & Electric for utilization of SDG&E helicopters.

“I’m so glad we’re doing all of this stuff now before fire season,” said Supervisor Jim Desmond. “We should be well-positioned to suppress fires.”

Because the county’s Sheriff ’s Department already had helicopter infrastructure in place through the Aerial Support To Regional Enforcement Areas (ASTREA) program, the firefighting helicopters are under the auspices of the Sheriff’s Department rather than under the San Diego County Fire Protection District. The Sheriff’s department provides pilots and mechanics along with equipment for the helicopters while the county contracts with the California Department of Forestry and Fire Protection to staff the helicopters.

The county currently has three Bell 205 firefighting helicopters. “We need more of these,” Desmond said.

The county’s current fleet utilizes single-engine helicopters. “The ones we have right now can’t fly at night. They carry less water,” Fletcher said.

“They’re also limited to where they can go and pick up water,” Fletcher said. “A twin-engine helicopter will address all of these issues.”

The new helicopters will also allow for the replacement of the older aircraft. Because pilots and mechanics are already familiar with Bell helicopters and equipment a sole-source contract was authorized to purchase the Bell 412 EPX helicopter. The specific motion authorizes the director of the county’s Department of Purchasing and Contracting to enter into negotiations with Bell and to award a contact after determination of a fair and reasonable price. Separate contracts will cover the helicopter purchase itself, parts and components along with repair and maintenance services over a five-year period, and pilot and mechanic training and certifications over a five-year period. The Department of Purchasing and Contracting director was also authorized to enter into negotiations with authorized Bell distributors and service centers, original equipment manufacturers, and specialized repair facilities over a five-year period.

The Bell 412 EPX, which is capable of a highaltitude hover and can also be used in search and rescue operations, is expected to be delivered to the county approximately 18 months after the purchase order.

“We can move rapidly on the purchase of our first twin-engine firefighting helicopter,” Fletcher said.

“We know over time we will need more than one,” Fletcher said. “Moving forward now is the right step.”

San Diego Gas & Electric utilizes helicopters for the placement of utility poles, and since 2009 the county has had an agreement with SDG&E which allows use of the aircraft for aerial firefighting. The agreement has been renewed multiple times, and in 2019 the county and SDG&E approved a three-year agreement which expires on June 30, 2022. The April 26 action authorizes the Department of Purchasing and Contracting director to enter into an agreement with SDG&E for up to three years with up to two additional option years which will allow an agreement without the need for Board of Supervisors approval if the county and SDG&E are supportive of those option years.

“This will add two needed helicopters to the current Memorandum of Understanding,” Desmond said. “I appreciate the partnership.”

Four SDG&E helicopters will be available for county use, an increase from the two in the 2019 agreement. Two Sikorsky UH-60 Black Hawk aircraft can each carry and unload more than 2,600 gallons of water per trip and can stay in the air for up to 2 1/2 hours before needing to refuel, which equates to between 20,000 and 30,000 gallons per hour depending on the proximity of the water source location to the fire. SDG&E also has a Sikorsky S-64 Skycrane and an Airbus H145, and the utility is planning to add another UH-60 next year.

The agreement limits the annual cost to SDG&E and the county to $150,000 apiece. SDG&E will cover the cost of the first two hours to operate the helicopter in the event it is needed for wildfire suppression while the county will cover the expenses for the next two hours, although if the $150,000 from SDG&E is exhausted the county would pay for those first two hours if its annual limit is not exceeded. After the first four hours jurisdictions requesting the services would pay for the flight time hourly rate cost. SDG&E will also make the helicopters available to cities and fire protection districts at no cost, although if the county has reached its maximum annual costs the jurisdictions would be responsible for the flight time hourly rate expense.

“This has been a long-desired goal of making sure as a region we’re better prepared to fight wildfires,” Fletcher said of the two actions.